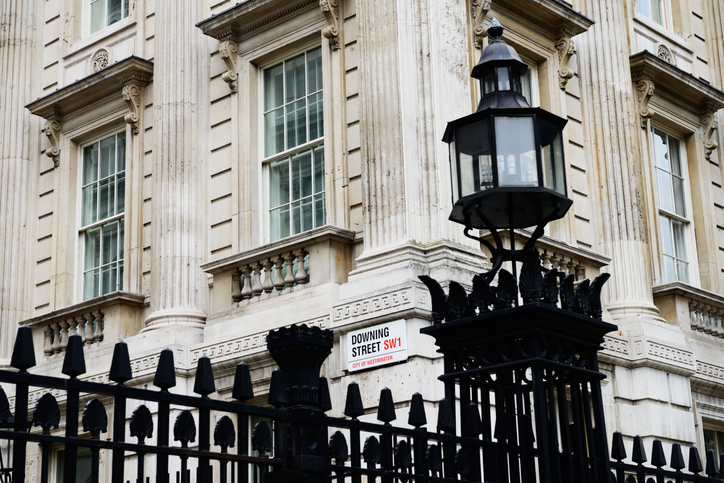 Downing Street bears the name of Sir George Downing, considered a disreputable rogue and political opportunist by many contemporaries and historians. His reputation was such that in New England, a “George Downing” became an expression to describe a false man who couldn’t be trusted.

How did this dishonor come to pass? After spending his formative years in the American Colonies (he was the second graduate of Harvard College), George Downing returned to England to seek his fortune. He was an eager Republican during the time of Cromwell (1653-1658), but quickly transformed into an ardent Royalist for Charles II when the tide changed and the crown was restored. He explained that he had been led astray in his youth by the Republican fervor in New England and now “saw the error.” Later, he betrayed his former friends—John Barkstead, Miles Corbet, and John Okey (three of the 59 men who had signed the death warrant for Charles I)—by arresting them in Holland and shipping them to England under heavy guard. All three were hanged, drawn and quartered.

The path that led him to confidence with Charles II was riddled with dishonesty. Cromwell’s representative in Holland, Downing perhaps sniffed a shift in the political winds, and held a secret meeting with the exiled Charles II (who was secretly visiting his sister at the Hague), warning him that the Dutch government had vowed to turn him over to the British Parliament if he set foot in the country. After being reinstated, as thanks for his loyalty (and thanks also to the intercession on his behalf of a noble compromised by incriminating documents in Downing’s possession), Charles gave him a grant of land in Whitehall, adjacent to St. James’s Park. There, Downing built the street that bears his name. Today, this unassuming block includes #10 Downing Street, the British Prime Minister’s home, and site of many historical moments in British politics.