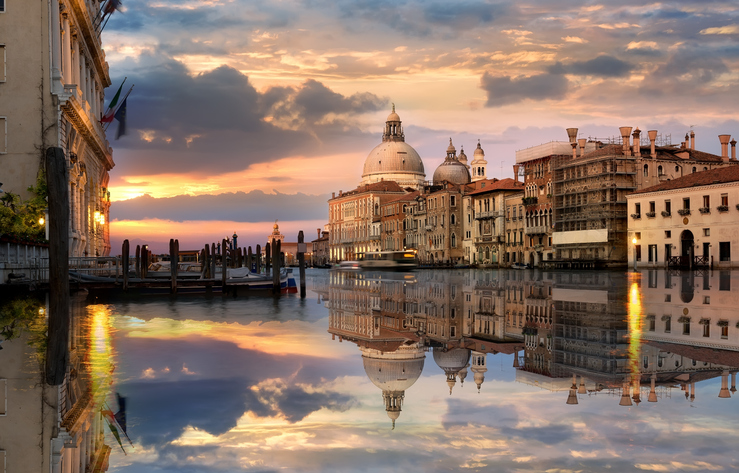 HUMAN STORIES THAT BRING THE PAST TO LIFE.

When the French writer Stendhal visited Florence in 1817, he was apparently so overwhelmed by the sheer wealth of artistic wonders that he fainted on the steps of the Uffizi Museum. While few of us have such an extreme reaction – psychiatrists have now given it the name “Stendahl’s Syndrome” – even old hands confess that the splendors of Italy can sometimes feel too rich to absorb. Should we concentrate on classical art? The Renaissance? Baroque? Rococo? But in the three great historical centers of Rome, Venice and Florence, there is an alternative approach: To find within this concentration of art and culture the lesser-known, human stories that bring the past to life.

Any Italian journey starts in Rome, amongst the ruins of the ancient Empire that once dominated the Mediterranean world. Standing by the columns of the ancient Forum, we need to remember that classical Rome was not the serene city of white marble often depicted by Hollywood but a densely crowded, cosmopolitan city of two million people – the New York of Antiquity – whose vibrant streets, lined with ramshackle wooden buildings, were filled with vendors, acrobats and jugglers. Pedestrians had to dodge tradesmen hawking their wares, jugs of wine hanging overhead from tavern doors, the jabs of fellow pedestrians, even barbers shaving in the middle of the street. And contrary to what we often imagine, the marble statues and temples were painted bright, eye-catching colors and sparkled with precious metals.

Today, the skeleton of ancient Rome is hidden within the modern city. As evocative as the Colosseum, but far less visited, are the more intimate sites such as the Markets of Trajan, the world’s first shopping mall, which had three stories of shops where fish were kept alive in tanks with salt water pumped 10 miles from the coast, or the rare remains of insulae (islands), the enormous apartment blocks where the average Romans lived in the shadow of the Imperial villas. And still looming in the city center are the ruins of the city’s beloved thermae, or bath houses — vast, cathedral-like spaces that were luxuriously decorated with mosaics and silver fountains, where Romans of all classes could swim in giant pools and work out in the gymnasiums.

When the Emperors were no more, the Popes took their place – in extravagance, at least. But the pomp and splendor of the Vatican, with St Peters Basilica and the Sistine Chapel, is made even more striking when learning some of the early pontiffs’ individual stories. Until recently, the Popes behaved more like Italian princes than spiritual leaders, declaring war, leading armies, commissioning artworks – and sometimes becoming involved in romantic scandals. Men such as Pope Alexander VI, a Spaniard whose lay name was Rodrigo Borgia, were sensual and ruthless figures, who also governed the papacy very ably, ensuring its survival today. Even the pope responsible for the spiritually uplifting Sistine Chapel, Julius II, was a brilliant general who rode at the front of his troops, fathered three illegitimate daughters and would never let his foot be kissed (according to one aide) because it had been disfigured by syphilis.

Florence, the cradle of the Renaissance, is considered one of the most magnificent cities on earth, but before we can grasp even a fraction of its marvels, we need to understand its tempestuous creation. In the 14th and 15th centuries, Florence’s artists were volatile and eccentric figures, with many now-beloved masterpieces being born within operatic chaos. While erecting the majestic Duomo, the architect Brunelleschi was involved in so much in-fighting that he was physically tossed from the worksite. Michelangelo’s unparalleled statue of David was criticized by contemporaries and even damaged in political riots. The breathtaking bronze Doors of Paradise might never have been finished, because the artist Ghiberti was found to be illegitimate and nearly lost his job. And the superb Ponte Vecchio hides through its circular windows the portrait-filled Vasari Corridor, a secret passageway across the River Arno that was created in case the Medici princes needed to flee a Florentine revolt.

Finally, Venice is such a recognizable city that its most precious canals and palazzos are in danger of seeming unreal. Yet it too preserves its secrets behind ornate doors. In the 18th century, it was the very real home of Giacamo Casanova, a man who many today think is a fictional character. From 1744 to 1796, he knew Venice as an alluring world of masked balls and gambling halls, and its perfumed courtesans were considered the most beautiful on earth. Amongst Casanova’s little-known exploits was an escape from the Doge’s Palace, where he had been confined by the Inquisition; in the company of a defrocked priest one moonlit night, he scrambled across the palace roof, hundreds of feet above St Mark’s Place, nearly slipping to his death several times. And while he is remembered by posterity as a prodigious lover, Casanova was personally more proud of his intellectual achievements: He wrote detailed mathematical treatises, debated with Voltaire and Benjamin Franklin, translated the Iliad from ancient Greek, invented the French lottery system, and worked on one of Mozart’s librettos.

Thanks to individuals like Casanova, an illicit atmosphere still haunts Venice. Along with its reputation for romance, it offers endless possibilities for leisure. A traveler can still wander aimlessly along the canals, discovering tiny eateries in dreamy cul-de-sacs – an emblem of the undying appeal of Italy as a whole.