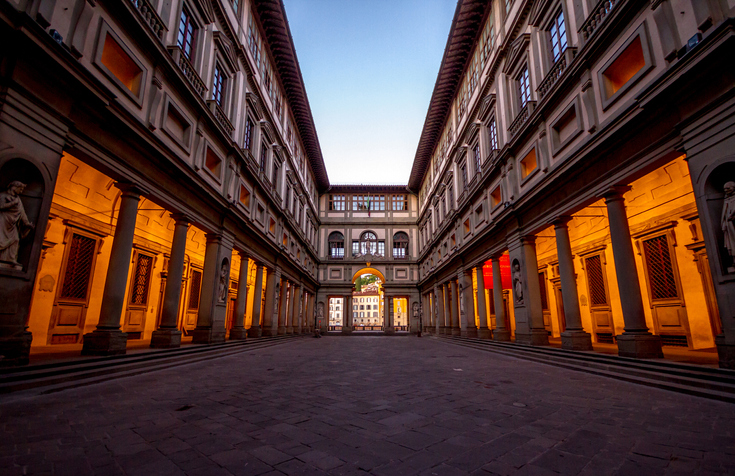 “AH, PERSPECTIVE, HOW SWEET YOU ARE!”

While the Uffizi Museum is world famous, few of the millions of visitors wandering its luminous corridors realize how much we really owe to its architect, Giorgio Vasari, a figure who defined our very notion of the Renaissance. A true Renaissance man in our modern definition of the term, Vasari was an accomplished painter and an inspired designer, but his true genius was actually as a writer. In 1550, he published Lives of the Most Excellent Painters, Sculptors and Architects of Italy, a classic of biography from which much of our knowledge of the Renaissance artists is drawn.

Exploring the Uffizi today is made a far richer experience after having read one of the many editions of Vasari’s work. Despite some exaggerations and creative flourishes, Vasari provides unforgettable images of the contemporary artists as larger-than-life personalities—driven by jealousy, torn by petty feuds, either devoting themselves to their work or being drawn astray by temptation.

Through Vasari’s words, we see Boticelli as a young dreamer, squandering his every penny on wine, women, and song—to the consternation of his friends—then, in old age, reforming as an austere religious zealot. We see the former monk Fra Filippo Lippi as a hopeless romantic, eloping with a nun, then switching from mistress to mistress and, finally, poisoned by the family of a girl he was courting. We see the visionary painter Paolo Uccello so obsessed by his revolutionary studies of spatial perspective that he mutters fondly in his sleep, “Ah, perspective, how sweet you are!”

We see Piero di Cosimo, painter of fantastical images, existing solely on boiled eggs, terrified of thunder, and having a pathological dislike for the sound of laughing children. We learn how the wealthy artist Francesco Rustici abandoned his aristocratic heritage, living in virtual rags and hanging a basket full of money in his studio for fellow artists in need. And we learn that the immortal Leonardo da Vinci, still handsome and debonair, hired buffoons and clowns to make Mona Lisa smile. Finally, we see how Giorgi Vasari’s hero (and former art teacher), Michelangelo, rarely washed or changed his clothes but transmitted the touch of God in his art.