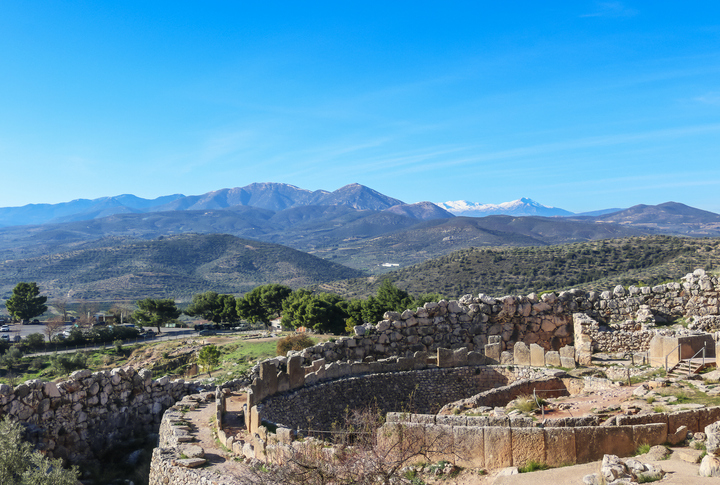 “ALL RIGHT, THEN. LET’S CALL HIM SCHULTZE.”

In the 19th century, most European academics believed Homer’s epic work The Iliad, about the Greeks’ 10-year siege of Troy around 1150 BC, to be a fabrication, and that the idea of a thriving civilization in mainland Greece during the Bronze Age (3000-1000 BC) was no more than a charming fable. But Schliemann—an unorthodox, self-taught visionary—was convinced that the Trojan War was based on actual events, and that the Homeric characters Agamemnon, Achilles, Helen, and Hector were real historical figures.

In 1873, Schliemann’s discovery of the actual site of Troy on the Hellespont made him an international hero. Then, in 1876, he turned his attention to Greece and excavated the fabled city of Mycenae, which Homer had said was home to the greatest Greek warriors. Within months, he had struck gold—literally. He discovered the tomb of a Bronze Age king, filled with armor, daggers inlaid with lapis lazuli, and silver-studded swords and scabbards. The most majestic piece was a funerary mask made of beaten gold, the portrait of a buried king. Schliemann declared that the shrouded body, which virtually crumpled to dust when exposed to the air, was that of Agamemnon, the Homeric leader of the Greek forces.

Unfortunately, it turned out that the doctor was mistaken; the grave pre-dated the sack of Troy by 300 years. When a colleague showed him proof that the golden mask was not Agamemnon’s, Schliemann snapped, “All right, then. Let’s call him Schultze.” It didn’t matter. Schliemann had proven beyond a doubt that a marvelous Bronze Age culture had thrived on mainland Greece, and that Mycenae would have potentially been able to lead a combined Greek attack on Troy. Along with his finds at Troy itself, Schliemann had revealed that Homer’s account held more than a grain of historical truth.