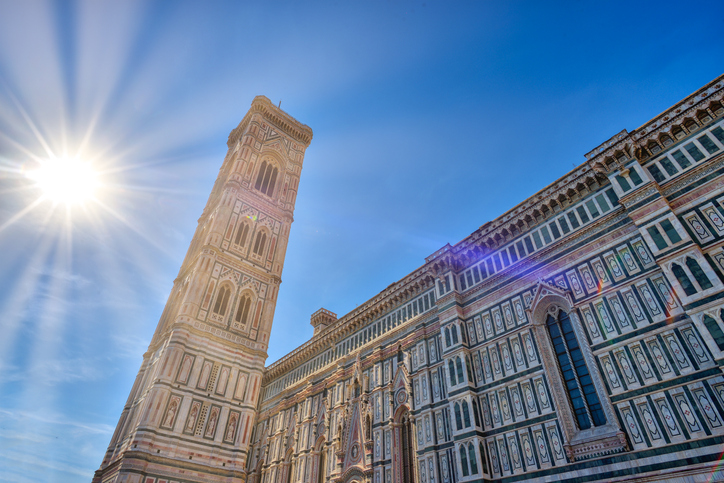 The illustrious Campanile of Florence was designed by Italy’s first “Renaissance man,” Giotto di Bondone (1267-1337), a short and notoriously ugly character who pioneered many of the artistic breakthroughs we associate with the period.

Acclaimed by Leonardo da Vinci as the first artist to “paint what he saw from nature,” Giotto was also a brilliant sculptor and architect, a personal friend of poet Dante, and a sharp businessman. He was also a likeable fellow. Supremely confident, talkative, and cheery, he was known in Florence for his ready wit and repartee.

One day, while he was walking with friends along the Via del Cocomero, a herd of pigs rushed past and knocked Giotto to the ground. Instead of sending a hail of Italian curses after the pigs, he dusted himself off and smiled. “But aren’t the pigs right to knock me over?” he said. “Over the years, I have made thousands of lire by using their bristles in my paint brushes, but I have never even given them a bowl of soup in return.” On another occasion, a friend jokingly asked Giotto how he could paint so many gorgeous pictures of angels but only produce plain-looking children. He laughed, “I made them in the dark.”

The Campanile bell tower is regarded as one of Giotto’s crowning achievements. The project’s brief, issued by Florence’s city elders in 1334, would have been daunting to any other artist. The bell tower must “exceed in magnificence, height, and excellence of workmanship anything of the kind built by the Greeks and Romans at the zenith of their greatness.” Critics then, and now, believe that he accomplished that feat.

Today, the Campanile’s fame rests not on its shape—Giotto had at first wanted to crown it with a spire, like an incipient Chrysler Building—but in its rich ornamentation, the delicately engraved windows and colored marble reliefs. As with many artworks in the Duomo area, the originals are now displayed in the Museo dell’Opera del Duomo, a few steps away, while copies grace the tower.

The Campanile took 25 years to complete, but Giotto himself never saw the final version, dying of natural causes at the age of 70. The beautiful highest arcade was completed by his students, but the conception and credit will always go to Giotto, “il maestro” and the father of the Italian Renaissance.