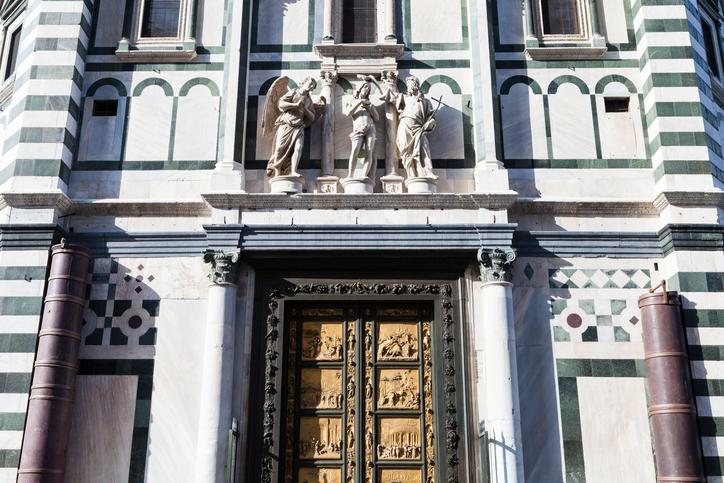 “SO FINE THAT THEY WOULD GRACE THE ENTRANCE OF PARADISE”

Michelangelo was often jealous of fellow artists, but he was generous with his praise for the sculpted East Doors of the Baptistry, the octagonal building next to the Florence Cathedral where all Florentines had been baptized for generations. He said that the 12 bronze reliefs were “so fine that they would grace the entrance of paradise”—and the evocative name, Gates of Paradise, has stuck ever since. Michelangelo was complimenting the artist, but also referring to the graveyard that once lay in the Piazza del Duomo, where the dead were laid out as if queuing for passage to Heaven.

The mastermind behind the Gates was Lorenzo Ghiberti. Years earlier, at only 25 years of age, the young prodigy had won a competition to decorate the Baptistry’s north doors with scenes from the New Testament. Those first reliefs, which had been lavishly bankrolled by the city as an appeal to God to end a plague that was ravaging Florence, had taken 21 years to design and cast. They won Ghiberti huge acclaim.

Now, in 1425, the middle-aged artist was asked to tackle the East Doors, working with a team of talented young assistants. Everyone knew from experience that they were in for a long haul—the resulting 10 panels, depicting scenes from the Old Testament, would take another 27 years to complete. Along the way, in the feisty, backstabbing world of Florentine artists, the Gates would become mired in scandal.

In 1444, a jealous rival declared that Ghiberti had been born illegitimate and was, thus, unqualified to work on such a prominent religious artwork. The charge was technically true. His mother had fled her half-witted husband for another man, borne two children and only married her lover after her husband was dead. City officials should have canceled Ghiberti’s commission, but they wisely decided to ignore the denunciation. The artist had proved he was simply too talented to sack.

When the finished product was revealed in 1452, Florentines were so astonished by its beauty and spiritual power—”perfect in every particular, the finest masterpiece in the world,” raved fellow artist Giorgio Vasari—that they endowed Ghiberti with a large estate for his old age, a declaration from the city of unreserved tribute.