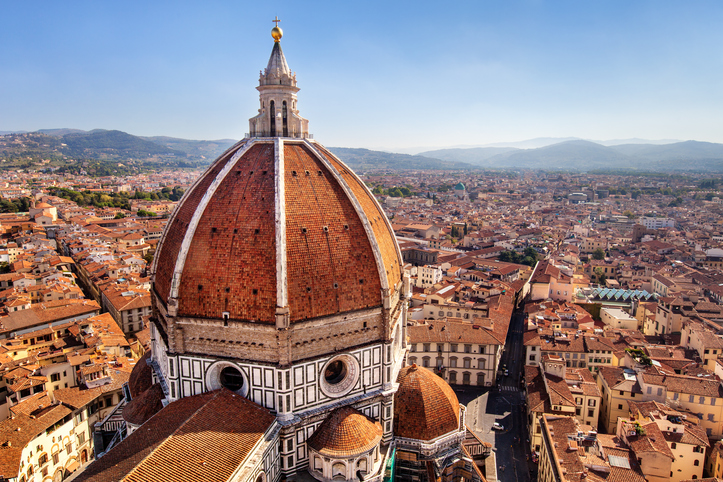 No masterwork in Renaissance Italy could have been as controversial as the dome of the Florence Cathedral. The battles that surrounded it were as bitter as modern wrangling over high-profile projects like New York’s MoMA. The celebrity “starchitect” of the day was Filippo Brunelleschi.

Rising from a modest Florentine family, Brunelleschi became obsessed with architecture in his twenties and walked to Rome to study the only surviving ancient temple: the Pantheon. Its magnificent dome inspired him to crown his hometown’s unfinished cathedral with an equally regal form. In 1420, Brunelleschi entered an architect’s competition, but his experimental plan for reviving the building techniques of the ancient Romans shocked the commission. At one point, he was accosted by rivals and physically ejected from deliberations. At another meeting, he produced half an eggshell as a model for his dome; its strength convinced skeptics that his design might succeed.

But there was still deep suspicion of Brunelleschi and he was forced to share control of the Duomo project with another artist, Ghiberti (who was also decorating the Baptistry in the piazza). Exasperated, Brunelleschi feigned illness and took to his bed until the tradesmen came and begged him to return to work. He did so and the humiliated Ghiberti resigned, giving Brunelleschi full control.

Never had a Florentine architect been so involved in the minutia of construction. Over 14 years, Brunelleschi supervised the day-to-day construction of scaffolds, invented a new pulley system to transport materials to great heights, and personally examined each brick as it came from the kiln. He was so “hands-on” that he was once arrested in 1433 for working as a builder without belonging to the guild (the charge was quickly dropped).

Brunelleschi accompanied the very first block of Carrara marble from the quarry and set it in place on the building site—and he lived long enough to see the very last block set at the apex. The resulting cupola was the largest dome erected in Europe in more than 1,000 years. Florentines boasted that its shadow covered the whole of Tuscany. Today it is still the tallest building in Florence and dominates the skyline for miles around.