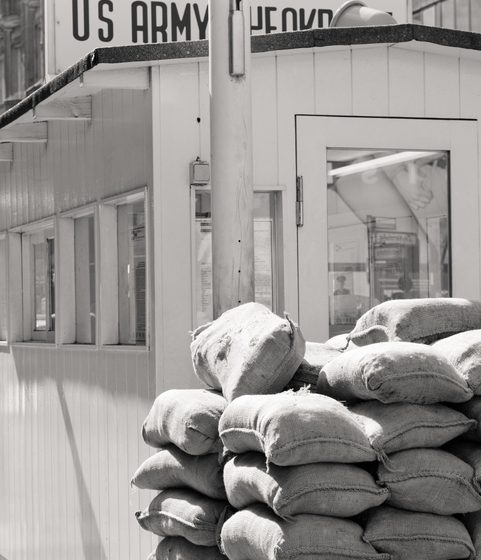 It’s just a white shed and a stack of sandbags filled with concrete, a replica of Checkpoint Charlie. Visitors to this traffic island on Friedrichstrasse pose from two directions—west and east—because they’re standing on the old symbolic border of the two Berlins.

Checkpoint Charlie was for diplomats, Allied military, and foreign tourists who wanted to get into East Berlin—and that’s the source of its mystique. Today’s Cold War buffs have to be content with photos by the 1960s-era replica shed, a browse through the private collections of the nearby Haus am Checkpoint Charlie, and maybe a visit to the Allied Museum in Berlin’s Zehlendorf district, where the original Checkpoint Charlie building is on display.

The huge portrait photographs over Checkpoint Charlie of two soldiers—one American, one Soviet—symbolize the Big Brother military presence of Cold War Berlin. One little-known fact: the young Soviet guard isn’t Soviet at all! He’s wearing the uniform of the Russian Federation…the photo was taken in 1994, three years after the fall of the Soviet Union.