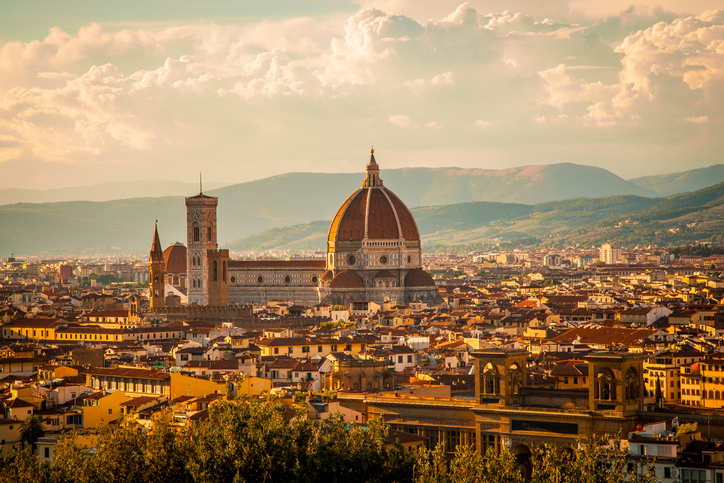 The world’s most famous statue after Lady Liberty, Michelangelo’s David has suffered some hard knocks since it was completed in 1504. The artist worked over 30 months for a mere 400 florins (roughly $50,000 today)—and when the official committee couldn’t agree where to erect it, Michelangelo suggested it be placed in front of the Palazzo Vecchio in Signoria Square, with full public access. It was an admirably democratic gesture, but Michelangelo hadn’t taken into account the violence of Florentine politics, let alone the effects of wild Italian weather.

As Il Gigante (The Giant) was moved into position in 1504—it took three weeks to shift the monolith, using a purpose-built scaffold on wheels—angry demonstrators pelted it with stones. The affront was not an act of art criticism; the triumphant David was seen to symbolize the recent victory of the Florentine Republic over the deposed Medici family, so pro-Medici factions decide to make a rowdy statement. Then, in 1512, lightning struck the base. In 1527, during another of Florence’s many riots, a wooden bench tossed from a window of the Palace hit the statue and broke off David’s lower left arm. A couple of young art students gathered up the pieces for safe keeping, which were eventually replaced.

David stood exposed but unmolested for the next three centuries, until in 1873 it was apparent that the elements were taking their toll on the statue’s surface. The city finally decided to move David to a purpose-built gallery within the Accademia delle Belle Arti (the Florentine Academy of Fine Arts), where it now stands, suffused by warm light. A recent cleaning has even restored its 16th-century marble sheen. (A splendid marble replica today stands on the original spot in the Piazza della Signoria, causing bottlenecks of snapshot-taking tourists moving between the square and the Uffizi).

But even the move to the Accademia did not protect David against the lunatic fringe. In 1991, a crazed Italian artist, protesting Florence’s excessive reverence for the past, smuggled a hammer into the building and attacked the statue, managing to shatter a big toe before he was apprehended.

Experience Italy on a Globus Vacation