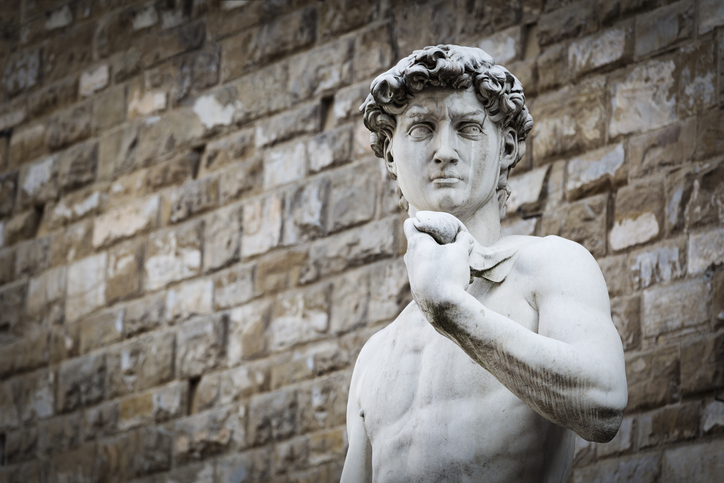 WHY YOU WILL NEVER LOOK AT DAVID’S NOSE THE SAME WAY.

Everyone was a critic in Renaissance Florence. While citizens agreed in 1504 that Michelangelo’s David was a masterpiece, a few local artists carped that there were flaws in the statue – the right hand was a touch too big, the neck a little bit long, the left shin over-sized and something about the left buttock was not quite right.

A story from the time recounts that Piero Soderino, the head of the powerful Florentine Republic, even told the famously irascible Michelangelo that David’s nose was much too large. Michelangelo then hid some marble dust in his hand, climbed back up his ladder and pretended to do some more “chiseling” on the offending proboscis. While he did so, he let some marble dust fall from his hand. The pompous Soderino was fooled – he examined the unchanged nose and announced it was much improved and far more “life-like.”

Curiously, nose stories play a big part in Michelangelo’s life. When he was a 16-year-old student in the Medici Palace, his brusque, rude manner offended a certain Pietro Torrigiano. Torrigiano punched Michelangelo square on the nose: “I felt bone and cartilage go down like biscuit beneath my knuckles,” Torrigiano gloated, “and this mark of mine he will carry to the grave.” Indeed, for the rest of his life, Michelangelo’s nose was disfigured at the bridge, making his notoriously unkempt, grizzled face look even more wild and unappealing than ever.

The historian Paul Barosky adds a curious footnote to these nose sagas. In Florentine slang, the nose is often used as a euphemism for another prominent part of the male anatomy. Thus, in the famous 1504 dispute, Soderino might not have ordered Michelangelo to reduce the size of David’s nose but this other organ, which the storyteller was too polite to directly name. Indeed, some early viewers of David were so offended by the statue’s casual nudity that the city council commissioned a gold fig leaf to make it more modest; but after a few years, it was quietly removed.