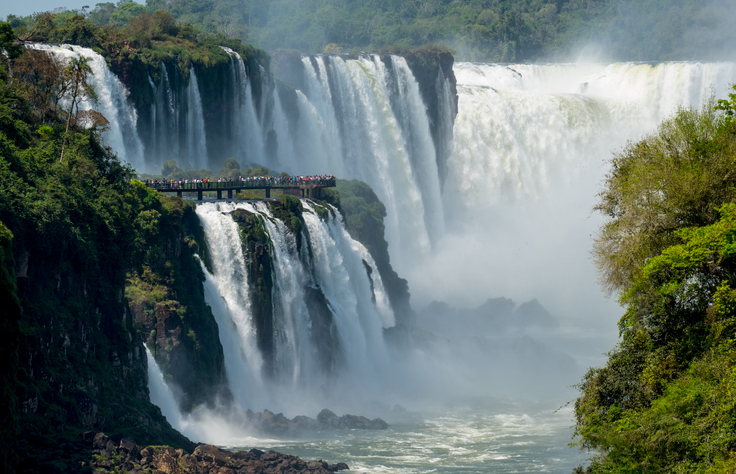 A small bronze plaque at Iguassu Falls commemorates wandering Spanish conquistador Cabeza de Vaca, who in 1541 became the first European to set eyes on one of South America’s most awe-inspiring natural wonders. We have no record of what the crusty fortune-hunter thought when first encountering the 275 cataracts that cover a distance of over a mile and a half—including the great arc known today as “The Devil’s Throat,” where water surges so violently over the rim that visitors today feel the need to wear raincoats on the walkways. But we do know that when Eleanor Roosevelt visited Iguassu Falls, now shared by Brazil and Argentina, she exclaimed: “Poor Niagara!”

Oddly, this South American powerhouse remained largely off the world radar until the 1986 film The Mission, starring Robert de Niro and Jeremy Irons, which shed some light on the area’s unique colonial history. It was around Iguassu that teams of Jesuit priests began setting up their mission stations in the 1600s to convert the local Guarani Indians to Christianity. Compared to other evangelical attempts of the time, it was a noble and humane experiment. Instead of putting the Indians to work on brutal plantations, the Jesuits created an enlightened system that allowed the Guarani to study, grow grain, and carve musical instruments that became famous in the courts of Europe. At their height, the missions housed 100,000 Guarani, with a standing Indian army to keep out marauding slave traders. And this system survived for over 150 years. But when the Spanish king expelled Jesuits from South America in 1767, the missions began to collapse, slave traders pounced, and the Guarani fled back into the jungle.

Today, the ancient missions remain as poetic ruins on both side of the Brazil-Argentine border, their walls decorated with elegant Indian carvings of angels and stars. In one, San Ignacio, the gravestones of the priests bear simple but clear messages: “Here lies Father Juan, a good man.”