PARTYING WITH THE POPES 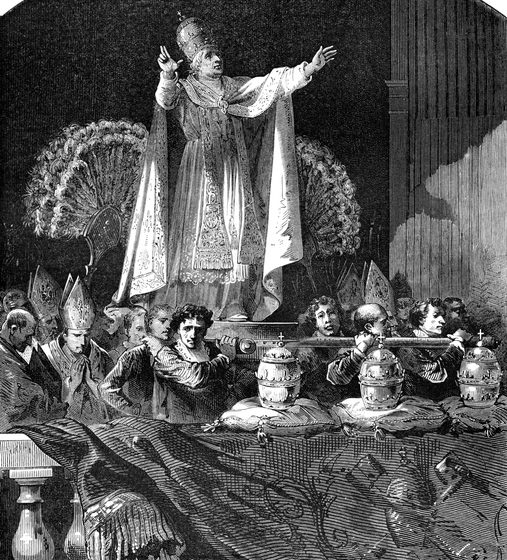 THE POPES OF AVIGNON KNEW HOW TO PARTY

The Popes of Avignon certainly knew how to throw a party. When Clement VI celebrated his ascension to the Pontiff’s office in 1342, the surrounding farms were decimated for the feast. Records show that for this single-day extravaganza, the kitchens prepared 118 roast oxen, 1,023 sheep, 914 lambs, 7,428 chickens, 1,195 geese, 3,043 fowl, 39,980 eggs, 6,000 pounds of almonds, 50,000 tarts, and 90,000 loaves of bread. Several hundred of the most important guests gathered in the Banquet Hall for this most elaborate meal.

Naturally, the medieval dining arrangements were far different from today’s. Food did not arrive in courses. The dishes were laid out on trestle tables before the guests arrived for an impressive visual effect, and diners had to choose from whatever they could reach from their assigned seat. Medieval cooks loved to make the food itself brightly colorful and even patterned, using contrasting dyes made from herbs, flowers, saffron, and gold leaf, and finishing with pomegranate seeds to resemble rubies. The meal was a carnivore’s paradise, with beast after beast arriving from the kitchen. The meat-carving was a prestigious, noble skill, and was often performed by the Pope himself, using an ivory-handled knife. The Pope’s own portion would then be passed under a narwhal’s horn, which was thought to detect poison.

There were no individual plates at that time. Each guest lay his meat on a thick slice of bread called a trench, which soaked up the juices and would be devoured in turn. The only eating utensil was a knife, so well-mannered diners used only their thumb and two first fingers to eat, with the pinky kept clean to dip into the salt. And there were no napkins. Guests would wipe their hands on the table cloths. The Papal feast ended with desserts highly prized in the Middle Ages: wafers, marzipan treats, jams, and candied fruit, all prepared within the palace itself.