THE GOLEM OF PRAGUE 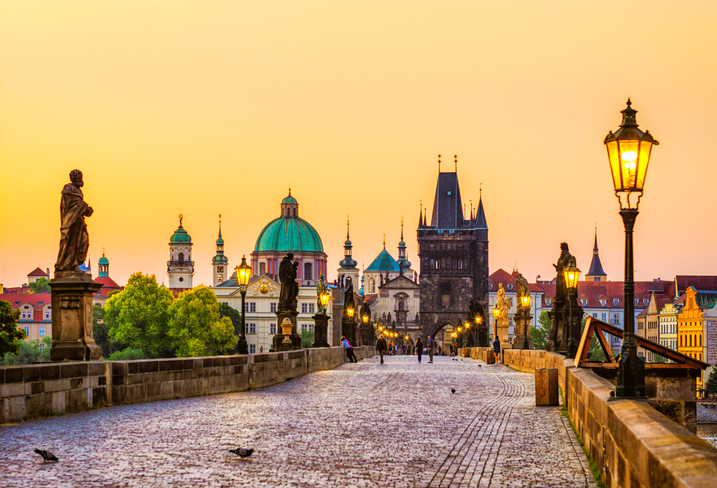 Prague boasts one of the world’s more peculiar city mascots: a lumbering clay monster known as the Golem. The creature is ubiquitous in the Czech capital, endlessly cloned into cute souvenir figurines, while Golem lends his name to local hotels, clothing boutiques, hairdressers, and even rock bands. Oddly, few Czechs remember that the Golem originated as a dark legend, born of the violence of the late Middle Ages.

In the 1500s, the Christians of Prague began a series of murderous rampages (pogroms) against the Jews in the city’s Ghetto. Later, when remembering that bleak era, the beleaguered Jewish Czechs began telling the story of the magical Golem that came to their aid. It was said that a learned rabbi named Judah Loew ben Bezalel (who was a real historical figure) fashioned a towering, man-like figure from the mud of the River Vltava, and used his knowledge of the kabalah to animate it with life. EMET, the Hebrew word for truth, was engraved upon the Golem’s forehead, and it would patrol the Ghetto and protect its inhabitants from mobs at night. But with no mind of its own, the Golem was over-literal in interpreting orders and went on its own murderous rampage against innocent citizens, both Christians and Jews. The rabbi was forced to erase the letter E from its forehead, replacing it with MET, the Hebrew word for “death,” thus, breaking the spell. He then interred the Golem’s remains in the attic of the oddly named Old-New Synagogue.

Today, the synagogue still stands in the Ghetto, and the current chief rabbi of the Czech Republic says that he has never dared enter its sealed-off attic. Meanwhile, the grave of Rabbi Judah Loew ben Bezalel, who died in 1610 at the age of 100, is still a revered pilgrimage spot in Prague’s Jewish Cemetery.