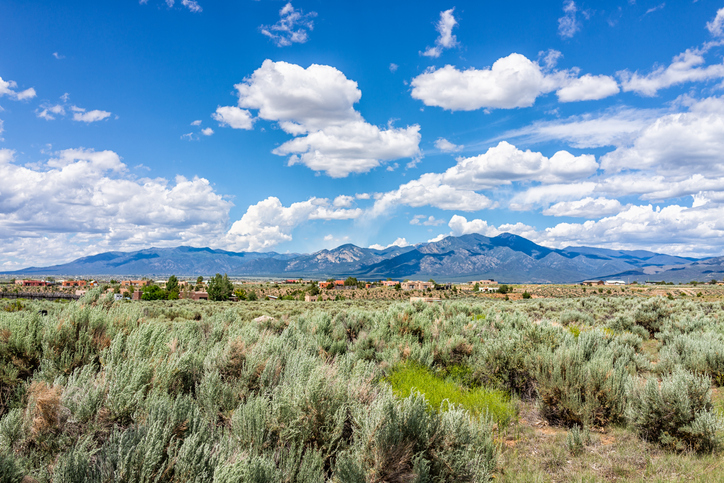 “THE GREATEST EXPERIENCE OF THE OUTSIDE WORLD” THAT D. H. LAWRENCE EVER HAD.

Thanks to its otherworldly landscape, New Mexico has long attracted artists. Perhaps the most famous is painter Georgia O’Keefe, who worked for decades in Ghost Ranch outside Santa Fe (a town that today boasts 300 galleries). But a number of more eccentric shrines lie scattered around the town of Taos, which in the early 1900s attracted a flood of visual artists, writers, playwrights, philosophers, and socialists.

Today, memories of the illustrious writer can be found all over the area. In Taos’ main plaza, the historic Hotel La Fonda displays Lawrence’s “Forbidden Art”—a dozen supposedly pornographic paintings that were once banned by the Vice Squad in London, causing a huge scandal. (Few people would be shocked today by the images, which are kept in a special studio.) Luhan’s grand adobe mansion, once the scene of riotous partying, is now a quiet bed-and-breakfast. Owned in the 1970s by actor Dennis Hopper, the house retains an aura of creativity, and you can still see Lawrence’s paintings in the windows of the upstairs bathroom.

In the Sangre de Cristo Mountains is the humble log cabin where Lawrence and his wife lived for several months after they left Luhan’s house. Lawrence’s ashes are actually buried here, beneath a crude statue of a phoenix. Before his death in Italy in 1930, he asked for his remains to be sent back to this once-remote corner of New Mexico—the landscape he loved best.

Travel to North America with Globus