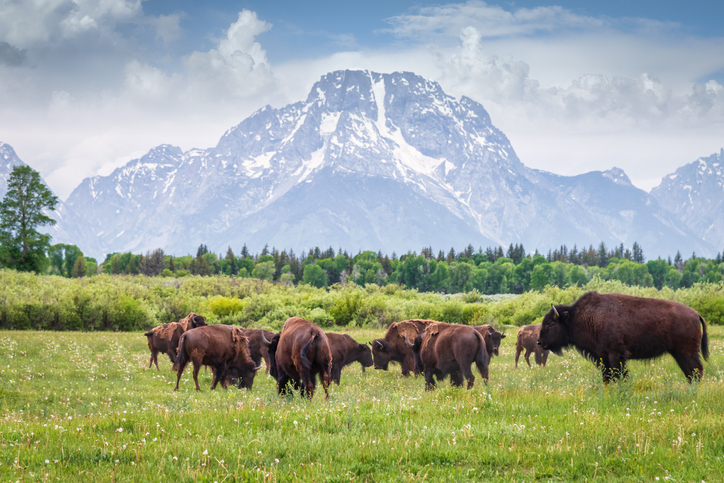 TODAY, THE JY RANCH IS OPEN TO THE PUBLIC FOR THE FIRST TIME IN OVER SIX DECADES.

The Rockefeller family’s historic association with Jackson Hole has continued to the present day. In September 2007, their private holiday home, the JY Ranch, covering 3,000 acres of the finest terrain in the valley, was donated to the U.S. government as a new addition to the Grand Teton National Park. Today, it is open to the public for the first time in over six decades.

The transition began in 2001, when 90-year-old Laurance S. Rockefeller—John D. Junior’s son, who had honeymooned at the ranch in 1934—announced that it would become the “LSR Preserve” and include a state-of-the-art Visitors Center crafted from recycled native woods.

Hikers can now take a 4-mile loop trail to crystalline Phelps Lake, passing through spectacular mountain landscape that has not changed since the Shoshone Indians roamed here over a century ago. What visitors won’t spy are the 30 log buildings that once made up the JY Ranch. Before the Rockefellers bought it in 1932, it had operated as Wyoming’s first dude ranch, but as part of the 2007 donation, all man-made structures were carefully removed, along with seven miles of asphalt roads and 1,500 tons of building materials, to return the lake to its pristine state.

Even so, it is easy to imagine the JY in its heyday, when a string of rough-hewn cabins with wooden furniture and stone fireplaces stood above the alpine lakeside. To this idyllic frontier outpost, Rockefeller family members would arrive from the East every summer to indulge in hiking, swimming, fishing, hunting, and horseback-riding—outdoor pursuits not so very different from those enjoyed by the Shoshone in warmer months.