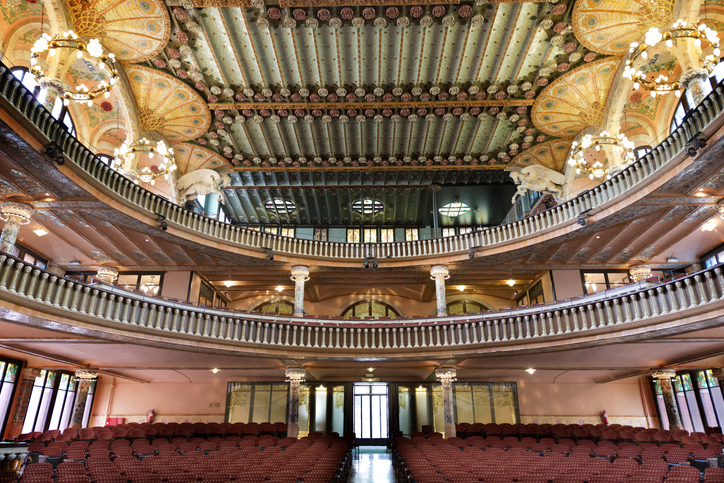 Anyone wandering the northern fringe of Barcelona’s Old City will pause in astonishment before a building that is flamboyant even by this city’s standards: the Palau de la Música Catalana (Catalan Palace of Music). It was designed in 1908 by a leader of Barcelona’s “Modernista” architectural movement, Domènich y Montaner, as a lavish temple to the Catalan Renaissance, the revival of interest in the Catalan language and culture that had been gaining pace since the late 19th century.

The Palace’s towering terracotta façade is a fantasia of columns and curlicues, with images of Beethoven, Bach, and Wagner embedded in its decorations. The interior is even more magical, with winged horses soaring over the balconies and ornately carved arches, one depicting a local composer, Anselm Clavé, leading maidens in a traditional Catalan song, Flors de Maig (May Flowers). But the centerpiece is the ceiling, where an enormous bulb of brilliantly colored stained glass explodes downward, suggesting the sun bursting forth from a blue Mediterranean sky.

Perhaps only Sydney’s Opera House can be compared to such a stunningly creative performance venue. There are daily tours of the Palace, but consider instead buying a ticket for one of the evening concerts, so you can join the throngs of devoted locals, starting, of course, with a glass of cava (Spanish sparkling wine) and selection of tapas (small plates of delicious snacks), at the exquisite bar. Here it’s easy to imagine Barcelona in its golden age of the early 1900s, when it first became a confident, booming city, filled with enough cabarets, bars, and brothels to rival Paris.