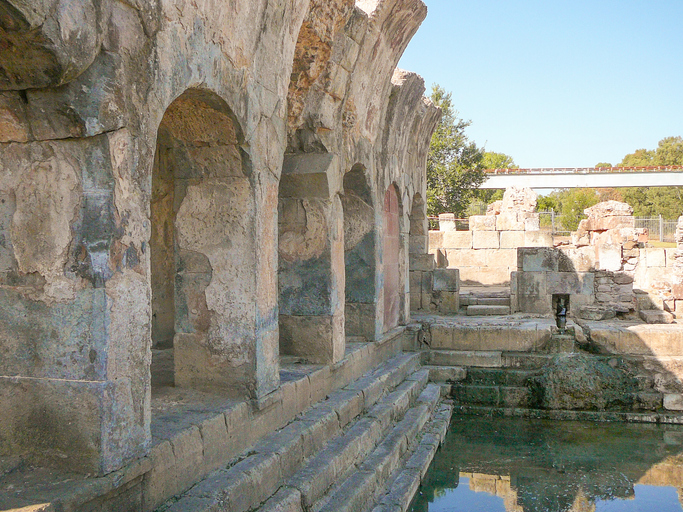 “WINE, SEX, AND THE BATHS MAY DESTROY OUR BODIES, BUT THEY MAKE LIFE WORTH LIVING.”

If you were visiting Rome 2,000 years ago, you would have been awakened at dawn by the melodious bass of a copper gong resounding through the streets, announcing the opening of the thermae (heated public baths). To ancient Romans, their routine visits to the more than 1,000 bath houses in the city were one of life’s ultimate pleasures. As one nobleman recorded on his tomb, “Wine, sex, and the baths may destroy our bodies, but they make life worth living.”

These thermae were far more than simple washhouses. They were the Western world’s first full-service spas, combining the facilities of gymnasiums, massage parlors, restaurants, and community centers. In their beloved halls, citizens of all classes would loll by the pools with their friends, play ball games, drink wine, flirt, and even enjoy elegant candle-lit dinners. Like modern gyms today, Rome’s baths were unofficially graded: some were chic, others déclassé. Some were expensive, others cost only a copper. Some, like the Baths of Caracalla and the Baths of Diocletian that can still be viewed in Rome today, were palatial structures as large as cathedrals, decorated with multi-colored mosaics of Neptune and his dolphins.

The atmosphere at these baths can be likened to a crowded beach in summer today. The noise was infernal. All around, merry-makers were exercising, splashing, playing hand ball; food vendors bellowed from their stalls; and professional hair-pluckers induced shrieks of pain that apparently rose well above the general din. Petty thieves worked the crowd, rifling through belongings as their owners were distracted. Servants of the wealthy trawled the steam rooms, handing out their masters’ banquet invitations to attractive strangers.

The early Christians were appalled by the open sensuality of these refuges. Bathing, sex, and eating well were the Holy Trinity of the Roman good life—and the many co-ed thermae encouraged all three. All bathers were naked in the pools; those who hid themselves were ridiculed. Clandestine lovers could meet in the baths’ restaurants and eye one another over chilled wine and figs. Special magical spells were even devised to incite romance at the baths. One had to be written in the blood of a donkey on a papyrus sheet, which should then be glued onto the ceiling of the steam room. “You will marvel at the results,” the author promised.