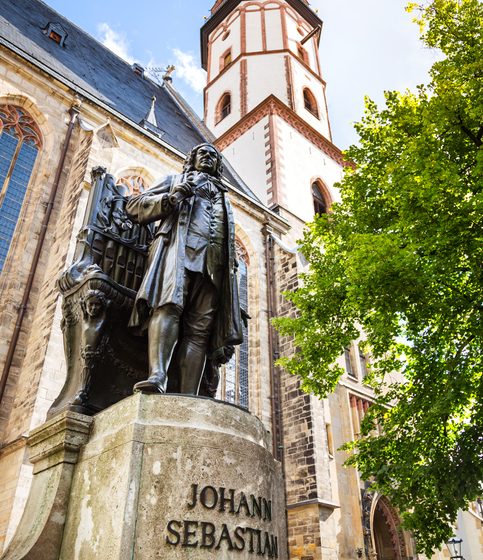 Johann Sebastian Bach was a lucky accident for Leipzig. In 1723, when the city sought a cantor for the gothic Thomaskirche, Bach got the job only when the city’s first choice, Georg Phillip Telemann, refused. Their second choice turned out to be the best—and forever changed music history.

Today, Leipzig calls itself the “City of Bach”—and with good reason. Leipzig expected Bach to work hard, and he did, almost slavishly for 27 years. Among other jobs, he composed cantatas for the services in the city churches and trained the Thomanerchor (boys choir) that still sings in the Thomaskirche on Fridays and Saturdays.

Bach lived with his wife and 17 children at the Thomasschule, the now-demolished schoolhouse where students also lived. Badly paid and appreciated more as an organist than a composer, Bach cranked out concertos, sonatas, fugues, and other works until his eyes failed him and a stroke ended his life in 1750. His widow, Anna Magdalene, a well-paid singer before her marriage, died a pauper.

Today, the Bach-Archiv in the Thomaskirchhof houses the Bach Museum’s exhibit on his life and works, as well as a library full of handwritten manuscripts. The master himself is buried in the Thomaskirche under a bronze gravestone.