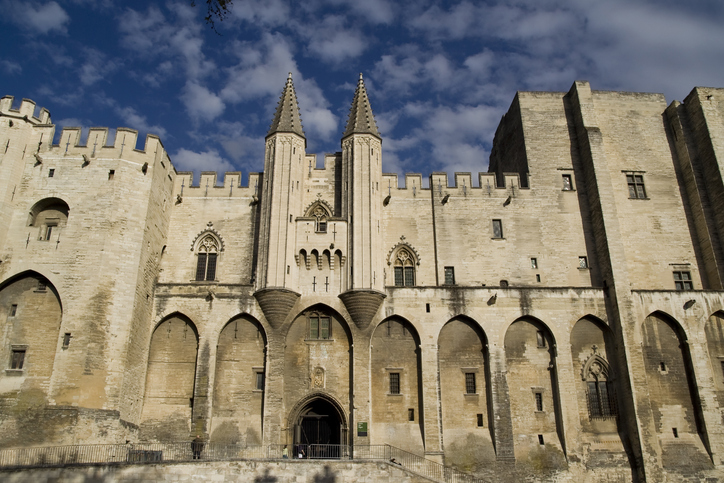 As the world’s largest Gothic castle, the Papal Palace dominates Avignon more completely than the Eiffel Tower does Paris. But awe-inspiring as the edifice is, we must use a little imagination today to picture the interior in its medieval heyday, when it was home for nearly a century to nine pontiffs.

Like almost all Gothic structures in Europe, the palace’s interior has been slowly stripped of decoration and furniture, so today the bare stone walls give us the impression that the residents existed in austere, monastic self-denial. Nothing could be further from the truth! The medieval Popes, who had abandoned Rome because of its political instability, enjoyed a level of sensual luxury that many of the faithful considered scandalous, earning the nickname, “the Babylonian Exile.” The Papal Palace was like the Las Vegas of the Middle Ages, with state-of-the art décor designed purely to delight and impress its occupants. Every floor gleamed with brilliant marble tiles, elaborate tapestries covered the walls, and statues lined the corridors. In the Grand Tinel (Banquet Hall), the ceiling was once hung with purple velvet studded with solid gold stars in order to evoke the night sky.

Two rooms in the palace still contain remnants of their original decoration. In the Pope’s Bedroom, every inch of wall space and ceiling is covered with a tempera mural of a forest, the delicate leaves hiding colorful wildlife. The painted birds were echoed in reality, as the Popes loved to keep caged nightingales to serenade them to sleep. The adjoining Stag Room was once Clement VI’s study, and its walls are covered with hunting scenes. For good measure, a unicorn and dragon frolic in the woods. These miraculous survivals were only discovered in 1906 because they had been painted over by French soldiers when the palace was used as a military barracks in the 19th century, an act of vandalism that accidentally preserved them. The subsequent layers were simply scraped away.