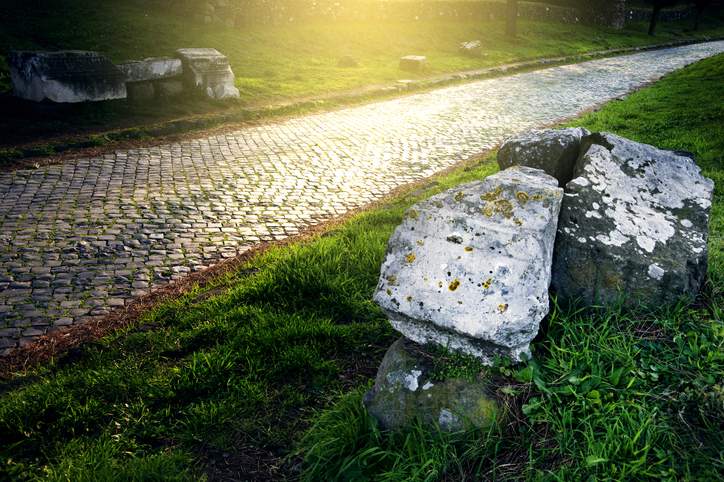 If you want to get a vivid sense of the ancient Roman highway system that spanned the Empire like the U.S. interstates today, take the short stroll to the outskirts of Rome to the Via Appia Antica (Ancient Appian Way), the “Queen of Highways.” In an ingenious feat of historical preservation, a 10-mile stretch of this splendid thoroughfare, which ran south to Naples and to the port cities beyond, has been turned into a unique archaeological parkway through the verdant Italian countryside. You can stroll the entire length on foot, catch the electric-powered Archeo-Bus, or explore it on a bicycle, which can be hired from the small office at the entrance to the park for a few Euros.

There is nothing quite like the experience of bouncing along 2,000-year-old wagon ruts engraved into the original basalt cobblestones. Back in the 1st century AD, this highway saw the first summer traffic jams as hordes of wealthy Romans tried to get to their holiday villas in the south, their chariots and bejeweled horses pushing past rural wagons and their peasant drivers on foot. And the bucolic views have hardly changed since antiquity. The road is still shaded with cypress trees and the lush farmland filled with fat sheep and framed by the Aqueduct of Claudius.

Visitors can also still inspect many of the 3,000 mausoleums of Roman aristocrats that once lined the road, built here because burials were forbidden within the city precincts. The tombs, now in ruins, were originally emblazoned with striking epitaphs that travelers once read like billboards: “READ, PASSING FRIEND, WHAT ROLE I ONCE PLAYED IN THIS WORLD.” One proclaimed, “AND NOW THAT YOU HAVE READ, HAVE A PLEASANT JOURNEY.” Others were philosophical: “I ADVISE YOU TO ENJOY LIFE MORE THAN I DID.” One was even a bit alarming: “BEWARE OF DOCTORS! THEY WERE THE ONES WHO KILLED ME!” Today, Italian families with their pampered dogs enjoy picnicking among the tombs, oblivious to the neurotic ghosts of their ancestors.