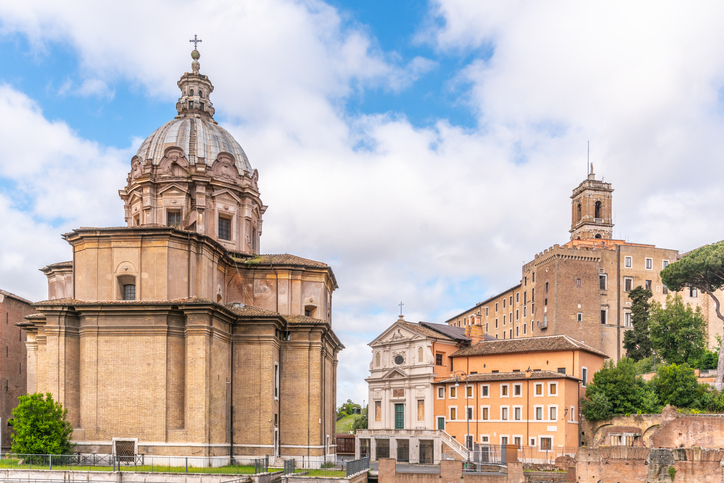 Ever since the time of the Caesars, climbing the Campidoglio (Capitoline Hill) has been the most thrilling introduction for visitors to Rome. During the Empire, this was the most sacred of the city’s seven hills, crowned by the fantastical Temple of Jupiter, whose gilded roof shone brilliantly in the Italian sun. Inside, an immense gold-and-ivory statue of Jupiter, king of the gods, presided over treasured artworks from around the known world. But it was the spectacular view that really drew the crowds. From the Campidoglio’s exalted heights, ancient travelers gazed in awe at the urban panorama below. Rome was far and away the largest metropolis the world had yet known, and its wealth of marble structures, the Greek orator Aristides gushed in the 2nd century AD, covered the horizon “like snow.”

Today, we can easily recapture a sense of that ancient euphoria simply by climbing the marble steps to the Piazza del Campidoglio, the square designed in the Renaissance by Michelangelo himself and described by one art historian as “the most spiritually uplifting urban space ever built.” The crest of the hill is now crowned by two papal palaces containing the renovated Capitoline Museums. In the mid-1500s these became the first public museums in the world, and their gleaming hallways are still graced today with classical masterpieces such as the Etruscan bronze She-Wolf suckling the twins Romulus and Remus, the symbol of Rome. And while the Temple of Jupiter was razed by barbarian looters in the 5th century AD, its location is once again a sacred site for Italians with its magnificent outdoor café. There is no better way to start a visit than cradling a glass of sparkling prosecco on this rooftop terrace and gazing across Rome’s fabled red-tiled roofs at sunset—just as a visitor might have done 2,000 years ago. “Rome in her glory!” intoned the poet Propertius in the age of Augustus Caesar. “Stranger, look your fill!”