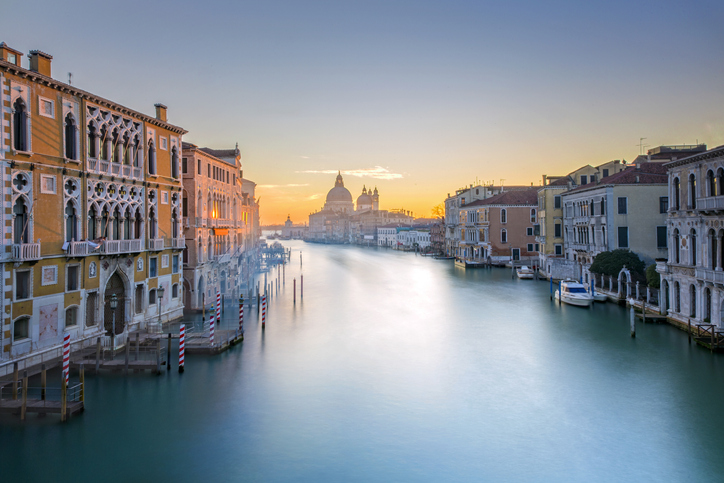 For one of the world’s most beautiful cities, Venice has certainly been featured in its share of melancholy movies: a morbid strain seems to flow through most of the films shot there. Perhaps this is an echo of the ambivalence felt by many 19th-century writers who came to Venice for spiritual rejuvenation but found the sumptuous decay of the city an inescapable reminder of mortality. Even the purportedly giddy Hollywood comedy Summertime (1955) has a bitter undercurrent, as Katherine Hepburn plays a lonely American spinster discovering an all-too-short romance in Venice.

The most haunting vision of the city is the art-house classic Death in Venice (1971), directed by Luchino Visconti from Thomas Mann’s famous novel. In the film, an ailing composer (Dirk Bogarde) comes to a grand hotel on Venice’s Lido beach in the early 1900s and becomes fixated on an angelic, golden-haired Polish boy. He finds himself obsessively wandering the crumbling, plague-ridden canals of the city, pondering his own lost youth and missed opportunities. A similar dark mood suffuses The Wings of the Dove (1997), based on the Henry James novel and starring Helena Bonham Carter. Here, a wealthy American heiress who discovers she has a fatal disease takes her friends to Venice for one last celebration of life, throwing herself into the carnival, a rented palazzo, and the joys of Italy before finally succumbing.

For many directors, the tranquil, picture-book quality of contemporary Venice seems to be a provocation to depict violence and criminal chaos. In Nicholas Roeg’s Don’t Look Now (1973), a murderer stalks Donald Sutherland and Julie Christie, with bodies popping up in many a lovely canal. Naturally, Venice has appeared in three James Bond movies: From Russia With Love (1963), Moonraker (1979), and Casino Royale (2006), where an entire palazzo collapses into the Grand Canal, boiling like a Venetian fish stew, and the film’s heroine goes to a watery, if suitably picturesque, grave.