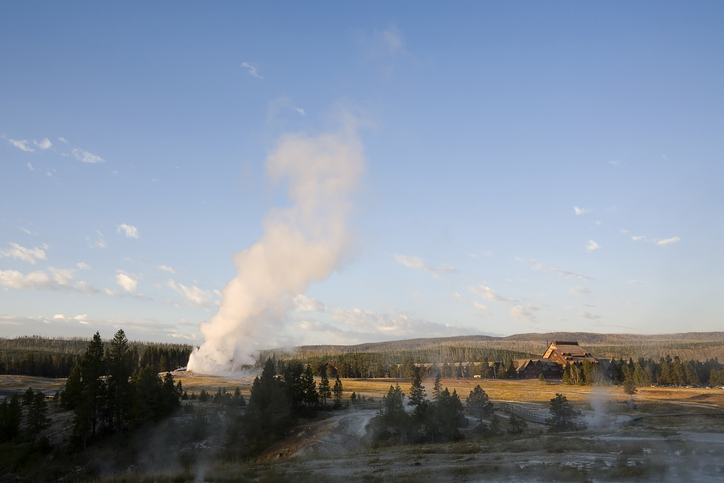 OLD FAITHFUL INN WAS BUILT TO CAPTURE THE WILD, UNRULY ESSENCE OF NATURE.

Even if you can’t stay overnight, be sure to visit Old Faithful Inn at Yellowstone, one of the most beloved of all national park historic accommodations. Its soaring 92-foot-high lobby, erected in 1904, is a marvelous thatch-work of gnarled and knotted tree trunks, evoking the sensation of being inside the primeval forest of Yellowstone. Its architect, Robert C. Reamer, wanted to capture the wild, unruly essence of nature, arguing that the Inn should look as if it actually grew on the spot. (“I built it in keeping with the place where it stands,” Reamer wrote. “To try to improve upon it would be an impertinence.”)

Today, the Inn’s older rooms still have their original raw pinewood walls, marble sinks, and claw-foot cast-iron baths. On cooler nights, the wind can sometimes whistle through old logs that make up the exterior walls. In 1959, an earthquake caused some structural damage, and its famous gabled roof is now, sadly, off-limits to the public—except for two individuals who are permitted to accompany a staff member raising and lowering the flags every dawn and dusk. (Not surprisingly, the ritual is hugely popular and booked up a year in advance, although it is worth asking at the reservation desk if someone has canceled).

Would-be roof-climbers should be aware that it’s not a trip for those leery of heights. Starting from the lobby, one ascends a series of rickety old stairs that seem to be suspended in mid-air as they sway underfoot like trapeze ropes. These pass by the precarious Crow’s Nest, a treehouse for adults where in the early 1900s a small musical ensemble would gather after dinner to serenade the guests dancing below in formal dress. But for those lucky few visitors who make the climb, the view from the roof across the steaming fumaroles of the Upper Geyser Basin is magical.