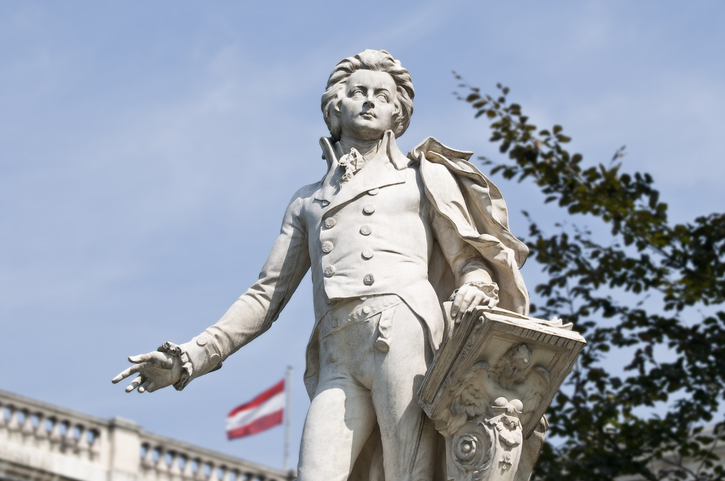 It sometimes seems as if all of Salzburg is a shrine to its most famous son, Wolfgang Amadeus Mozart, but the key attraction for classical music lovers is the modest house-museum called Mozarts Geburtshaus (Mozart’s Birthplace), where he lived until age 17. It displays with almost religious reverence the tiny violin he played as a toddler, a lock of his hair, and several of his jacket buttons.

It was in this humble abode that Mozart’s father, Leopold, first identified his son’s genius. By the age of two, little Wolfgang had not only learned to play many instruments, he had identified a pig’s squeal as the note G! He gave his first formal recital—and composed his first symphony—at the age of five, and for years the proud Leopold toured his child prodigy around the courts of Europe, giving blindfold harpsichord concerts and other “trick” performances.

Such an unconventional upbringing left Mozart with an eccentric personality. He would disappear for all-night drinking bouts, playing billiards and frequenting brothels; in his spare time, he taught his pet starling to sing operettas. He was delicate, short, and vain about his clothes and hair; those who met him observed that only his “intense eyes” gave clues of his divine spark.

Living in Vienna in his early twenties, Mozart fell in love with the famous soprano Aloysia Weber. When rebuffed, he married her sister, Constanze. Despite interludes of great success, he managed his money badly, squandering fortunes on clothes and luxuries. His family shuffled between ever-smaller apartments in Vienna, Paris, Prague, and Salzburg. (He returned to Salzburg for four years in the now Mozart Wohnhaus (Mozart Residence), another fine museum with original manuscripts and multimedia exhibits).

The circumstances of Mozart’s death were famously mysterious. At the age of 35, while writing his Requiem and at the height of his powers, he contracted a fever and claimed to his wife that he was being poisoned. He died a few weeks later and was buried in an unmarked Vienna grave in 1791. The film Amadeus revives 18th-century rumors that point the finger at Antonio Salieri, an Italian composer who was tormented by his own mediocrity. Experts have found no evidence to support the accusation, and believe that Mozart actually died of rheumatic fever and the typical incompetence of 18th-century medicine.