YELLOWSTONE: BIRTH OF THE PARK MODEL 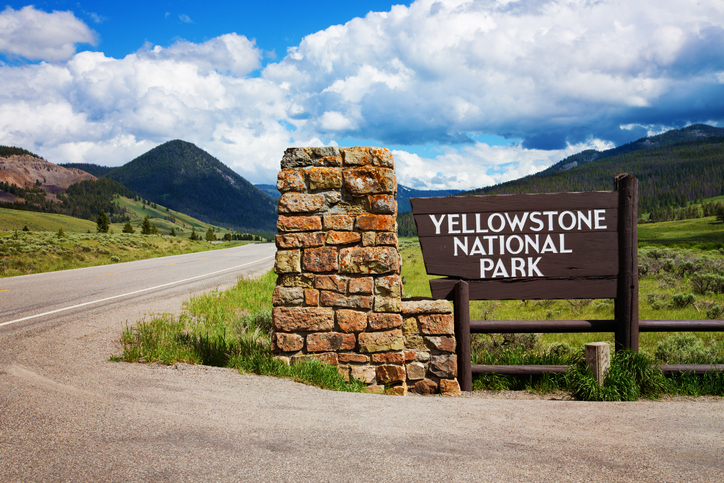 THE UNIFORM OF PARK RANGERS ECHOES THOSE OF EARLY ARMY OFFICERS.

Today, Yellowstone is virtually a country unto itself. It has its own weekly newspaper, a vast staff, a $30 million annual budget, army-sized campgrounds, and visitor complexes as busy as miniature cities. But even with this infrastructure, much of the landscape has not changed since the Victorian era, when only 300 or so lucky travelers would arrive on horseback each summer, following rough animal trails. The first hotel arrived in 1871, McCartney’s Cabin at Mammoth Hot Springs, a makeshift log structure where guests had to sleep on the floor. Most preferred to camp in the forest, catching fish for dinner in the pristine lakes.

Holiday activities back then were similar to those we enjoy today. Pioneer travelers would rush to natural wonders with romantic names like the Castle, the Giantess, and Minerva Terrace. The more adventurous descended into Yellowstone Canyon with ropes, and gaped at the thundering waterfalls—or scaled Mount Washburn for sweeping views of the park. Happily exhausted, they would gather around the campfire to sing, tell stories, and stage quaint theatrical shows.

But in the days before “sustainable tourism,” other 19th-century behavior now seems shocking. There were no park rangers, so campers poured soap into the mouths of geysers to hasten eruptions. They did their laundry in the hot pools. They carved their names all over rocks and trees, and chipped off delicate silex formations to take home as souvenirs. Meanwhile, poachers pillaged wildlife, unchecked. In fact, behavior was so unruly that in 1886, Congress handed management of Yellowstone to the U.S. Cavalry. The park remained under military control until 1916, when the National Park Service was created (and today, the uniform of park rangers echoes those of early army officers).