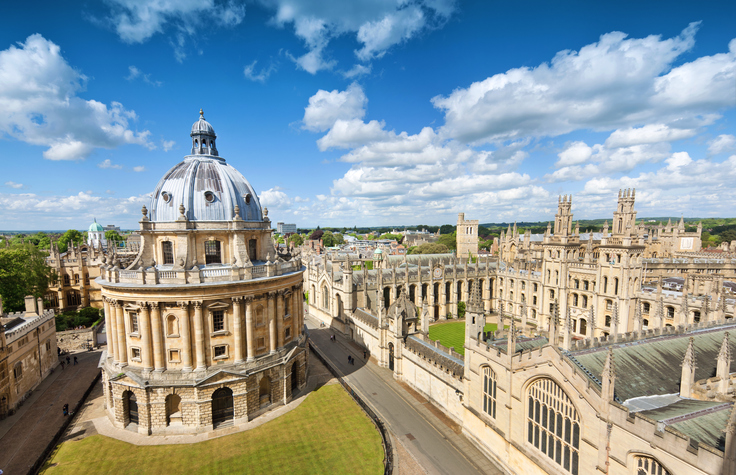 WHY IS IT CALLED “CITY OF DREAMING SPIRES?”

Oxford has long served as an inspiring landscape to writers, artists, and dreamers. In his poem, Thyrsis, written to commemorate his friend, Arthur Hugh Clough, who died in 1861, Matthew Arnold famously captured Oxford in the view from Hinksey Hill with the evocative expression, “that sweet city with her dreaming spires,” describing the elegance of the famous university buildings. Today, the view from Hinksey Hill is less dreamy, despite the greensward foreground of “Matthew Arnold’s Field,” which was purchased by the Oxford Preservation Trust in 1928. Now, those spires are best appreciated from atop St. Mary’s or Carfax Towers in town.

Other literary treats lie in Oxford’s Christ Church College, where Charles Dodgson (a.k.a. Lewis Carroll) was a mathematics tutor from 1855 to 1898. He created his Alice’s Adventures in Wonderland and Through the Looking Glass to entertain the daughters of Dean Henry Liddell. Much of his inspiration came from Christ Church, including the long-necked “firedogs” that hold the logs in the fireplace (Alice’s neck stretched long), the narrow spiral staircase down which the Dean would disappear after meals (down the rabbit hole), and the mulberry tree outside the library where a cat would perch (the Cheshire Cat). Today, a stained-glass window in the Hall depicts scenes and characters from the stories. And, of course, the Hall was used in the Harry Potter movies as the dining hall at Hogwarts.

For the less lofty, a stained-glass window in Christ Church Cathedral tells the story of St. Frideswide, Oxford’s patron saint, with her deathbed panel bowing to modern convention. The window was made in 1858—a year after the aptly named Thomas Crapper invented the flush toilet. Thus, a flush toilet sits clearly in the background of the final dramatic panel of this famous window.