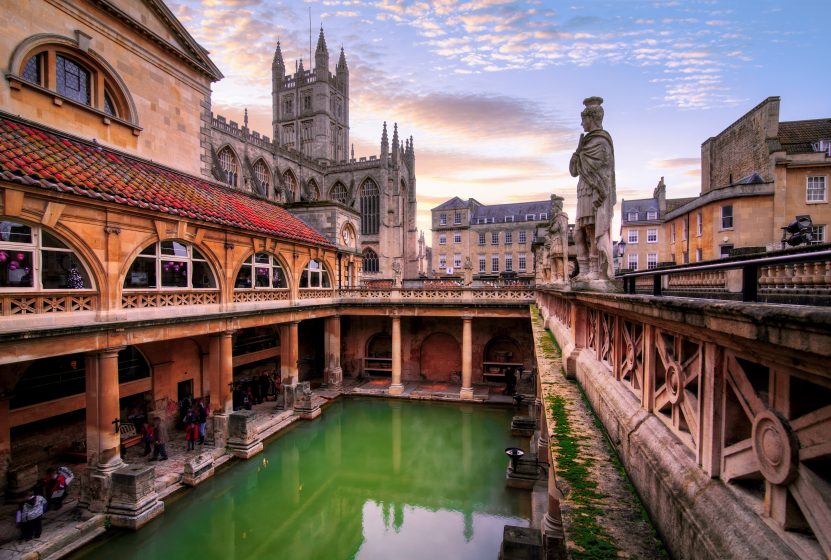 THE ROMAN HERITAGE OF BATH

It’s no secret that the Roman Empire has a firm grasp on history, given the depth and scope of their conquests and the sophistication of the societies the Romans produced, as a whole. What some may not know, however, is that when the Romans conquered territory they were careful to respect sacred sites they encountered, knowing that ruling an area, after conquest, was easier if they melded their gods and beliefs with those of their conquered cultures.

A unique example of this exists today in Bath. Before the Romans came to the United Kingdom in the 1st century, the hot springs at Bath were a sacred Celtic site dedicated to Sulis, goddess of the thermal spring. Upon their invasion, the Romans combined the attributes of Sulis with their own goddess of wisdom, Minerva, and built a temple and bath complex called Sulis Minerva. Combining the custom of bathing with a sacred site where worship took place was unusual for the Roman Empire. They seemed to embrace it, however, renaming the town Aquae Sulis (waters of Sulis).

Just as unique were the methods of worship that took place at Sulis Minerva. For instance, one form of veneration at the hot springs was to beseech the goddess to seek revenge on enemies. As part of this ritual, worshipers wrote curses on pewter sheets, folding and tossing them into the hot springs. Archaeologists found these pewter sheets after extensive excavation work began on the site in 1979. Today, this custom and piece of history has been preserved for passersby, as the sheets are now on display in the Roman Baths. The Baths, a marvel of both nature and Roman engineering, are fully functional, even after being buried for centuries.