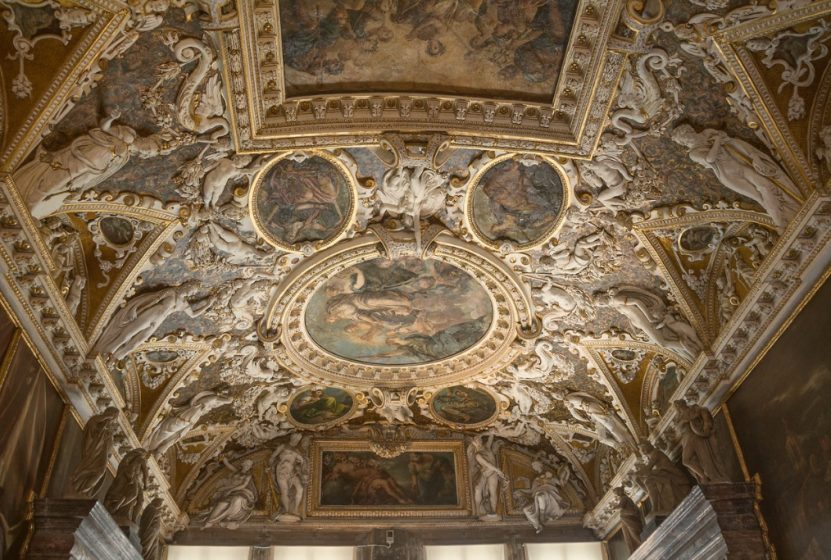 The interior of Doges’ Palace is lavish, even by Venice’s excessive standards. As chief magistrate and leader of the Republic, the Doge was the symbolic embodiment of its power and prestige—and his residence was filled with ornate, wood-paneled offices featuring sun-filled porticoes commanding the best views of the Lagoon where it meets the Grand Canal. But a visitor today will look in vain for any personal items left by the great men who inhabited these plush private apartments; there are none of the individual mementos or keepsakes that fill most European palaces. This historical anonymity is a result of deliberate policy. The Doge was not so much a monarch as the CEO of a vast Renaissance trading corporation, “Venice Inc.” He only kept his position at the pleasure of the 200 leading families who really ran the Republic through the Grand Council (and whose names were recorded in a Libro d’oro (Book of Gold).

Upon being elected to office by the Council, and usually well into old age, the Doge basically abdicated his private life and submitted to the ceremonial role as head of state. The Palace was a gilded cage, and the Doge could not even leave its precincts without special permission from his bodyguards. Upon his death, a team of state officials came into his apartments and ritually removed any trace of his presence, in preparation for the next Doge, who also lived there as a transient tenant.

The best place within the palace to understand this peculiar role is not in the many council chambers but in the magnificent Sala dello Scudo (Shield Room), where the Doge held his official receptions. It is named after the golden Coat of Arms that was changed for each office-holder; the current one belongs to the last Doge, deposed in 1797 by Napoleon. An ambassador would be invited into this cavernous chamber, whose walls are covered with four giant maps of the world, as understood in the Renaissance. Two immense globes represent the terrestrial world and constellations.

As a visitor pondered the extent of Venice’s empire on these walls, the Doge would sweep into the room in his finery, his cape a kaleidoscope of gems: his official bonnet alone was encrusted with jewels valued at 194,000 ducats (an estimated $50 million today), a blur of iridescent color that may have inspired the lush palette of Venetian painters. Few could have failed to be impressed by the wealth and power of this tiny Republic, whose influence reached across the known world.