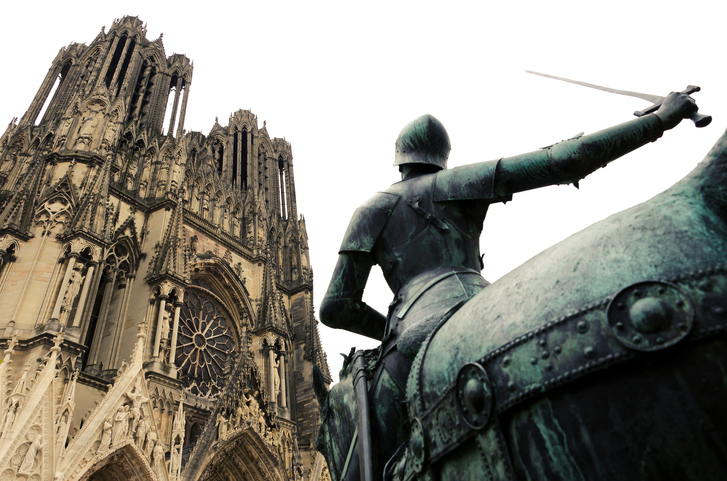 FRANCE IN THE TIME OF JOAN OF ARC.

In 1420 France appeared destined to become part of a much larger English kingdom. Following major victories at Agincourt and successful sieges at Paris and Rouen, Henry V of England concluded a treaty that disinherited Charles, heir to the French throne. Henry’s untimely death in 1422 left the kingdoms of England and France to his infant son. John, Duke of Bedford, ruled France in his stead, while Charles had retreated to his castles in the Loire, penniless and dispirited. When in 1428 the English besieged Orléans, the gateway to the English southwest, most observers believed that the little that remained of France would soon fall. Only a miracle could save the country.

The ‘miracle’ turned out to be a seventeen-year-old peasant girl from the border region of France. Joan of Arc finally convinced the captain at Vaucouleurs to send her to Charles at Chinon castle in early 1429. Seeing a girl with a boy’s haircut dressed in male clothing, many courtiers laughed at Joan or called her crazy, urging Charles to send her away. Yet others at court helped pave the way for her mission to save ‘France.’ After passing inspections for theological and physical purity, she was trained in warfare and given a suit of armor, standard and banner. She began dictating letters to the English command, warning them that if they did not leave France, her army would cause great harm to them, making a greater uproar than had been heard in a thousand years. The English laughed and called her names.

At the end of April, Joan entered the city of Orléans to a rousing welcome from its beleaguered citizens. Although the court had intended her to be a figurehead, she took matters into her own hands, winning the hearts of the townspeople and the respect of hardened soldiers. Many commented that she was so competent in the art of war that it was as if she had been a captain for 20 or 30 years. A week after her arrival, the English, terrified of this girl who had survived an arrow wound and rallied the French forces, lifted the siege and fled. Within two months, what had become Joan’s army had cleared the English from the Loire Valley after a series of major victories. Although Charles’ counselors urged him to take the fight to Normandy, Joan convinced him that like his predecessors, he had to be crowned at Reims to be recognized as the legitimate king. Town after town fell to the royal army as men flocked to join the girl who had come to be called the Maid of Orléans.

By September, heady with success, Joan decided to attack Paris. The Duke of Burgundy, allied with England, nominally controlled the capital. Considering her earlier victories, Joan did not understand that with its moats and impregnable walls, Paris could not be taken without insurrection from within. With cannons bellowing, Joan and her men descended into the ditches while the city’s defenders hurled abuse at her, calling her a slut and worse. Two days later, the king called off the siege, much to Joan’s anger. Paris proved to be a turning point. The army sustained its first failure, and more importantly Joan lost her aura of invincibility. She had also served her purpose. Charles VII was king, now controlling a considerable part of his kingdom. He hoped to make peace with his relative, the Duke of Burgundy. But Joan wanted war. By March of 1430, as she saw towns that she had won in danger of being retaken by the English, Joan left the castle of Sully-sur-Loire without the king’s permission. She wrote to the cities, advising them that even if Charles would not come to their aid, she would. Finally, when the peace treaty expired, Charles sent Joan and the army to fight the Burgundians at Compiègne. As the French troops retreated into the city, the drawbridge was pulled up, leaving Joan outside with her brother and a few others. A Burgundian soldier pulled Joan from her horse, according to one chronicle, by grabbing the cloth of gold doublet she wore. The Burgundians were more joyous than if they had captured a king, for they ‘feared no captain as they had the dreaded Maid.’

Joan twice tried to escape Burgundian captivity, the second time falling from the castle keep at Beaurevoir, nearly breaking her back. Finally, she was sold to the English. Fearing attempts at rescue, her captors hugged the coast of Normandy before heading south to Rouen. They had decided that it was far too dangerous to put her on trial in Paris. She was taken to her prison in the Château de Bouvreuil on Christmas Eve 1430.

Even before the trial began, the Duke of Bedford announced to the trial judge that he would take Joan back into English custody if she were not convicted. Over the next five months, Joan endured grueling sessions but answered her questioners with a wit and sarcasm that stunned her judges. She claimed that the voices of Saints Catherine and Margaret and the Archangel Michael had guided her mission from the start. Though she almost never mentioned these names before, they were inspired choices. Catherine and Margaret had been virgin martyrs; Catherine had also bested the most learned men of her time in debate, much like Joan would do in Rouen. Seven centuries earlier, the Archangel Michael, patron saint of France, had roused a local bishop to build the abbey of Mont St-Michel, the only site in Normandy that did not fall to the English. But despite her skillful defense, Joan was convicted of heresy. Her real crime, as many at the time said, was that she was not English.

On May 30, 1431, a cortège surrounded by over 100 English soldiers wielding pikes and swords wound its way through the narrow streets of Rouen. In the cart at the center of the procession was 19-year-old Joan of Arc, clothed in a shift and wearing a fool’s cap inscribed with the words ‘Relapsed, Idolator, Heretic, Schismatic.’ Eight to nine hundred people packed into Old Market, where a high platform had been erected so that all present could see the execution. As Joan prayed and asked that a crucifix be brought from a nearby church, the fire blazed up. The Maid of Orléans probably died of smoke inhalation within 10 minutes, although it appeared to those in the crowd that she was burned alive. Even some of those who had hated her wept at the sight. One English soldier, who had sworn he would throw her into the flames with his own hands was so overcome that he had to be taken to a tavern in the Old Market to regain his composure. The flames glowed from morning to late afternoon until Joan had been reduced to ashes. So that no one could snatch possible relics, the English ordered the executioner to throw the ashes into the Seine.

So died Joan of Arc. But in her short career, she had helped create the notion of France and a specifically French identity. In 1449, Charles VII ordered his army to attack Normandy. Rouen fell as did all of Normandy the following year. The reconquest continued and in 1453 Bordeaux surrendered to Charles. Of all its territories in France, England retained only Calais. The Hundred Years War was over. While dynastic intrigues continued, Charles proved himself worthy of Joan’s belief in him as he created a standing army and built the framework for a strong France. While some have declared Joan to be a mere footnote in this story, most recognize that without the sheer will, determination and leadership of Joan of Arc the result might have been very different.