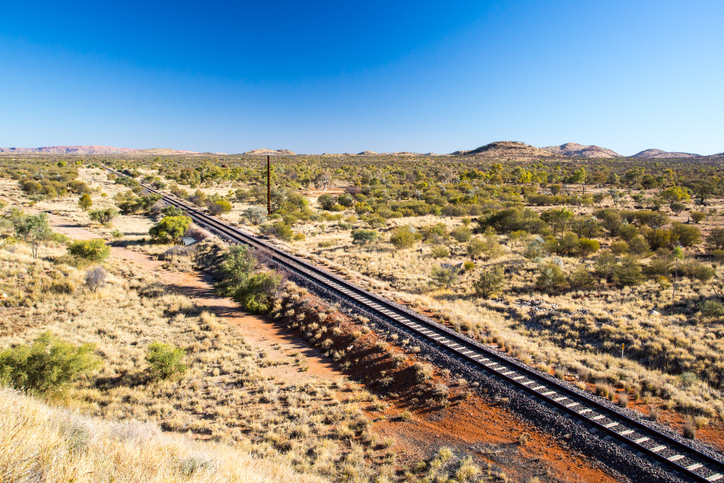 While most developed countries have scaled back their long-distance railway services, Australia in 2004 opened the final section of its most famous line, which cuts the country in two from north to south: the “Ghan.” The train line was the fulfillment of decades of dreaming and hard work. The idea of a north-south transcontinental line had first been posed in the 1800s, but the formidable engineering difficulties of crossing deserts and tropical jungle delayed construction. It was not until 1929 that the first 900-mile leg, from the coast of South Australia to Alice Springs in the scorched center, was finally opened as the “Afghan Express,” with weekly passenger trains making the 24-hour journey. (The odd name came from the hardy Afghan camel traders who in the 19th century provided the only long-distance transport link across the Red Center; it was soon shortened to the affectionate “Ghan.”)

The Australian government had always intended to extend the railway line to Darwin in the sweltering savannahs of the Top End, but the staggering cost of a monsoon-proof line made the project seem like science fiction. A start was made with U.S. help during World War II, but it wasn’t until the 21st century that the transcontinental extension was seriously tackled again—and after four years of back-breaking labor, the inaugural transcontinental train, packed with politicians and journalists, left Adelaide on February 1, 2004, to cover the 1,800-mile distance in two days and two nights. Today, train-lovers are lured by the Ghan, as they are the Trans-Siberian or Orient Express, and reservations are booked out months in advance.