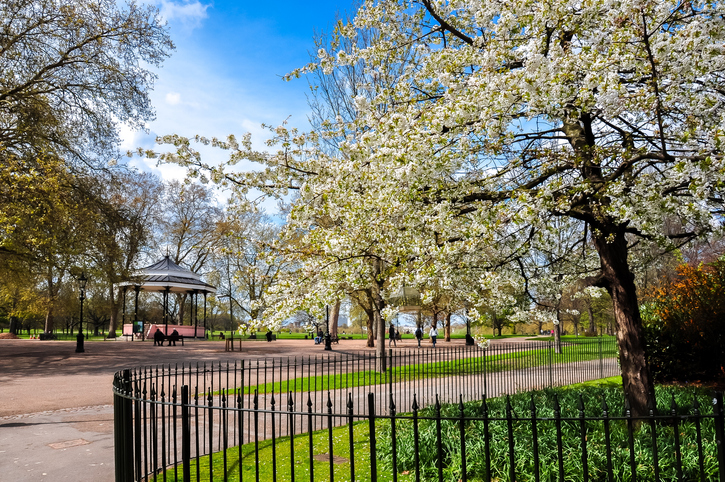 Spirited discourse that in some countries would push opponents to blows occurs weekly in Westminster Palace when the House of Commons gathers to question the Prime Minister. This free-wheeling expression is mirrored by the wild but controlled melee that occurs daily, but most popularly on Sundays, at Speakers’ Corner in Hyde Park. This is bombast by and for the masses, a place where anyone with a hard shell and a firm opinion can say whatever he or she wants—and receive feedback, in kind.

Speakers’ Corner has its roots in the folkmoot (meeting place of the people) that arose in Medieval England. It was a place for the public to express their views and have their say in government. For centuries, London’s folkmoot was in the precincts of St. Paul’s Cathedral; by 1241, it centered around St. Paul’s Cross, near the cathedral’s northeast corner. The folkmoot helped give rise to free speech, and continued at St. Paul’s Cross until the early 17th century. In the 1850s and 1860s, Hyde Park became a site for demonstrations; in 1872, park authorities officially permitted public meetings there.

Topics have always concerned issues of the day and greater ideas such as freedom, liberty, spiritual bondage, and economic disparity. These days, the rhetoric has become more religious, with zealots going nose to nose. The cultural pressure in today’s Britain is clear as Muslims rail against Christians, Jews, and British-American policy in the Middle East, and British standard bearers sound the warning about militant Islam. At Speakers’ Corner, proselytizers of all types try to push and pull society to their version of the truth—just like it’s always been. Famous people who have spoken here include Karl Marx, Vladimir Lenin, and George Orwell.