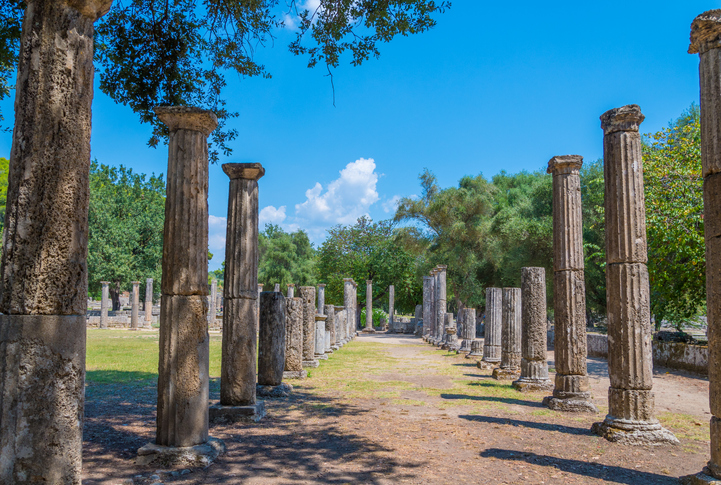 When the Olympic Games returned to the land of their birth in 2004, many were surprised to learn that their classical home was not Athens but a small riverside sanctuary some 160 miles south, called Olympia. Today, it is an evocative experience to visit this serene outpost. Archaeologists have unearthed the ancient stadium, complete with its original running track and even a marble-inlaid starting line. Olympia is a dreamy place today, but the pagan festival was anything but peaceful. Every fourth summer, 50,000 sports fans would converge on Olympia, overwhelming the modest local facilities. The atmosphere resembled a badly planned rock festival. The only two inns at Olympia were reserved for VIPs, so everyone else camped on the hillsides: Plato himself once had to share a tent with snoring strangers.

To see the athletic events, spectators had to sit on a bare hillside for hours in the blistering sun, without seats or shade, eating cut-rate sausages sold from dubious vendors and drinking cheap wine. There was no regular drinking-water supply at Olympia, so many collapsed from dehydration. Of course, none of these difficulties deterred Greek sports fans in the least: One Athenian baker boasted on his gravestone that he had been to the Olympics 12 times. And athletics was only one dimension of the festival. In between sports events, spectators could listen to famous Greek poets and admire artworks like the Statue of Zeus, one of the Seven Wonders of the Ancient World. No wonder that for over 1,000 years, the Olympic Games were considered the greatest spectacle on earth.

Travel to Greece with Globus