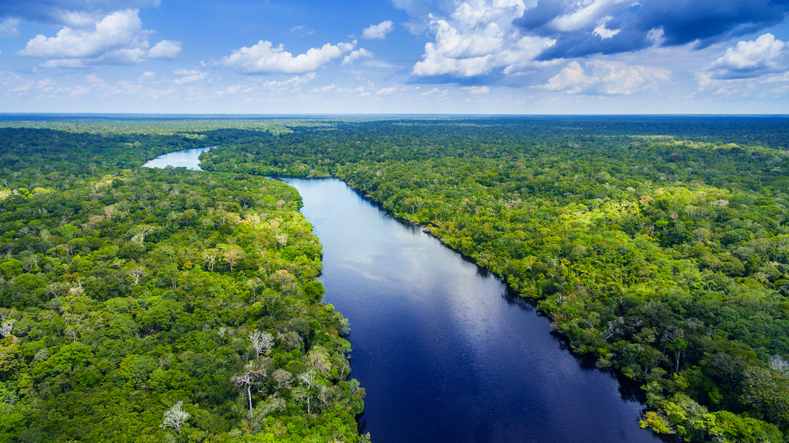 THE LAST THING YOU MIGHT EXPECT TO FIND IN THE MIDDLE OF THE WORLD’S DENSEST RAINFOREST IS A ITALIAN OPERA HOUSE.

But in the city of Manaus, the Renaissance-style Teatro Amazonas looms above the fast-flowing river like an apparition from a distant world.

Its improbable saga began during the 1880s rubber boom, when the pneumatic tire was invented and Amazon rubber suddenly became a valuable substance. Pioneers flooded into the jungle by riverboat, and the remote camp of Manaus, thousands of miles from civilization, became a boom town overnight. In this Brazilian El Dorado, millionaire rubber barons outdid one another to prove their sophistication, ordering the latest fashions from Paris, building art nouveau mansions, and lighting cigars with $100 bills.

In 1881, the local governor decided that Manaus should become the Southern Hemisphere’s cultural hub by building an opera house along the lines of Milan and Naples, then pumped a fortune into the project. It took a decade and a half to ship the luxury materials from Europe, including swathes of Carrara marble, 198 chandeliers, and 36,000 ceramic tiles, but on New Year’s Eve, 1896, the marvelous house was inaugurated with a performance of La Giaconda. The audience sweated through the show in tuxedos and evening dresses, swatting malarial mosquitoes with their theater programs. But the evening was a huge success. Patrons were dazzled by the sumptuous interior, which boasted four levels of Corinthian pillared balconies and Louis XV-style red velvet chairs. The house curtain was painted with Grecian nymphs lolling at the meeting place of the Amazon and River Solimoes, which occurs at Manaus.

In 1982, the theater enjoyed renewed fame when it was featured in the Werner Herzog film Fitzcarraldo as a monument to human obsession. Today, operas are still performed here, although the musicians are mostly immigrants from Eastern Europe, lured to the jungle from their chilly homelands.