CHANGING OF THE GUARD

BARCELONA: THE SPIRIT OF GAUDÍ 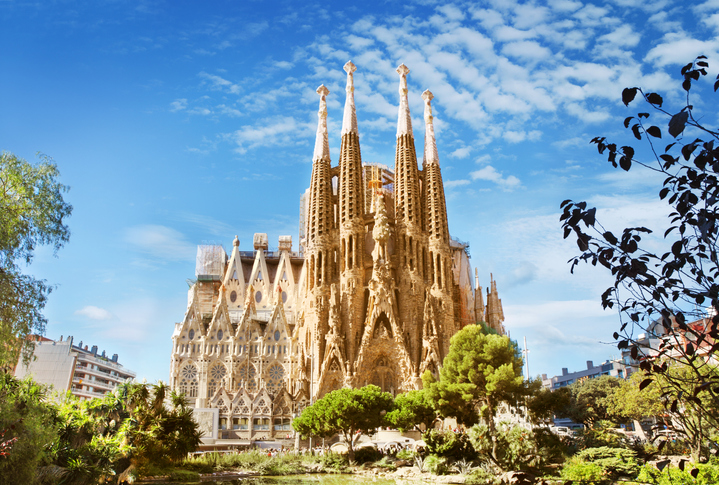 IT’S NEVER TOO LATE TO START A 115-YEAR-LONG PROJECT.

With his wildly inventive design sense, the architect Antonio Gaudí is revered in Barcelona today as the ultimate Catalan genius. Every one of his buildings is a prized monument, whose fantastical shapes are reproduced on millions of souvenirs, There is even a campaign by local Catholics to have Gaudí canonized as a saint. But ironically enough, while Gaudí was alive, Barceleños were by no means convinced of his brilliance, In fact, many civic leaders regarded him as a crank and a vandal who was defacing the neo-classical beauty of the city. And Gaudí was, without doubt, an eccentric figure. He was born into a wealthy family, and in his twenties seemed a typical gentleman-about-town, devoting himself to frivolous café life and studying architecture almost as a part-time hobby.

Everything changed when, at the age of 31, Gaudí’s proposal of marriage was rejected by the woman he loved. Heart-broken, he took refuge in religion. He turned his back on his family’s wealth and decided to live as an ascetic, growing his hair long, wearing simple robes and eating only a diet of nuts and lettuce dipped in milk. But he continued designing buildings as offerings to God. Gaudi drew on the patterns of Nature – the shapes of tree roots, the scales of fish, the membranes of butterfly wings. While some thought him mad, other wealthy patrons in Barcelona saw a divine spark in his spiritual imagery.

From 1911, when Gaudí began work on his masterpiece, the Church of the Sagrada Familia, he lived in a humble hut on the site, sleeping on a pallet like a medieval monk. It was still unfinished in 1926, when he was hit by a tram and killed. The ambulance drivers, assuming he was a beggar, took his body to a pauper’s hospital, where frantic admirers finally found him. Gaudi’s funeral, however, was attended by thousands. The people of Barcelona realized that they had lost a truly original spirit, and vowed to complete his Sagrada Familia Church. An ambitious task to this day, it is projected to be finished in 2026.