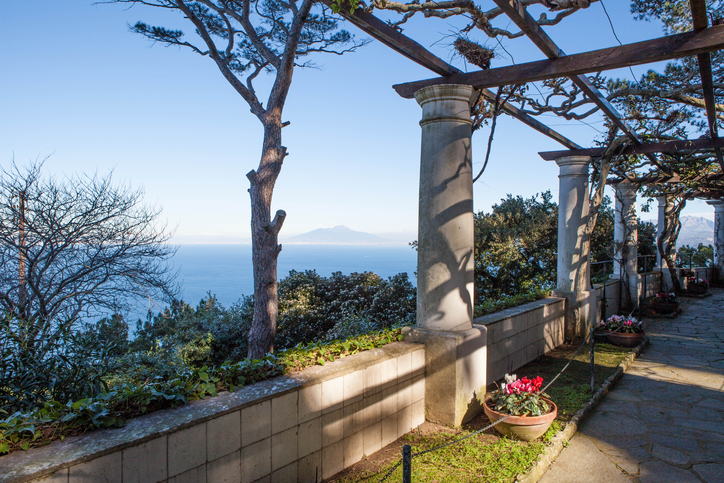 A PARADISE FOR MEGALOMANIAC ARCHITECTS

Capri has recently become a paradise for megalomaniac architects: one multi-million dollar villa after another has made inventive use of the island’s deliriously steep landscape. The most beautiful villa on the island is actually one of the oldest, the Villa San Michele—a virtual Temple to Art built by a Swedish doctor, Axel Munthe, in the early 1900s. One famous visitor, novelist Henry James, called it “a creation of the most fantastic beauty, poetry, and inutility that I have ever seen clustered together.” Today, operated as a Swedish cultural center and including a bird sanctuary, this lovely, eccentric property can be visited on private tours.

Dr. Munthe had survived bloody European wars and dreadful plagues in Naples before he moved to Capri in 1887. He was instantly bewitched by the island and decided to build his dream home on a cliffside in the village of Anacapri (Upper Capri). At the time, this settlement could only be visited by climbing a rugged track that had been carved by ancient Phoenician sailors. The building materials, along with the artworks he had acquired over the years, had to be lugged up on mule-back.

By 1910, the mansion had taken shape in the form seen today, a magnificent structure perched on the edge of a cliff. The lush, secluded garden is decorated with an astonishing collection of stone Sphinxes, bronze nymphs, and gargoyles, and its balconies offer the most incredible views on an island already famous for them. From its high parapets, one can spend hours watching vessels carve long white wakes in the ocean, like delicate paint strokes on cobalt blue.

In 1929, Munthe wrote a superb memoir about his experiences on Capri, The Story of San Michele (a prototype of modern classics, like A Year in Provence and Under the Tuscan Sun). To Munthe’s astonishment, it became an instant bestseller. The book has since been translated into 45 languages and has inspired millions of people to visit Capri’s seductive shores, which remain a yardstick for natural beauty the world over.