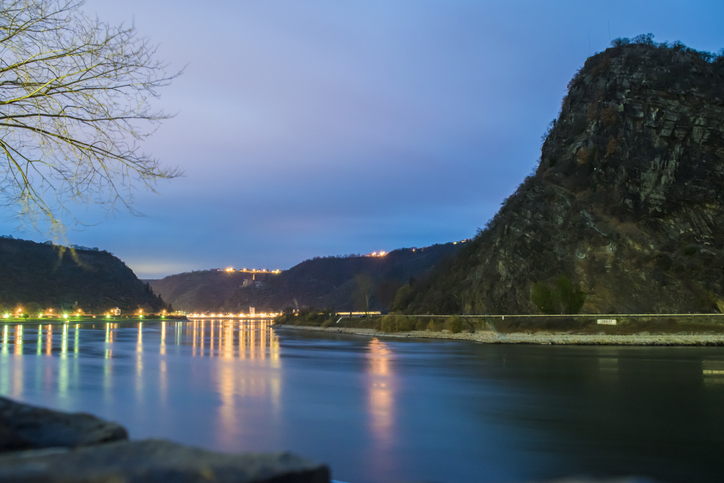 A CLIFF PLUNGING INTO THE RHINE RIVER

The Lorelei is a cliff that plunges into the Rhine River. As legend has it, Lorelei was also a water nymph who sat high on the rock, combing her golden hair and luring sailors to their deaths with her beauty and seductive song.

The magical landscape along the Rhine, between Koblenz and Mainz, only helps to bring this legend to life for the growing number of travelers enjoying river cruises through the area. The river winds through cliffs, where medieval castles perch on the heights next to vineyards, as villages squeeze here and there between the water and the hills. The middle Rhine is so unique that UNESCO named it a World Heritage Site in 2002.

With castle ruins and medieval villages all along the river, why is there such a fuss about a rock? Many don’t think much about the legend or the famous Heinrich Heine song about the Lorelei played on the tour boats until they encounter the Rhine in the evening. At dusk, the green hills turn gray and shadowy, the water murky. And it’s quiet. The water lapping over the rocks sounds like applause, whispers sound like public announcements, a moped engine booms across the river. Twilight on the Rhine is both peaceful and a little ominous. It’s the perfect time to imagine a lone sailor out on the water, captivated by a deadly song echoing among the cliffs.