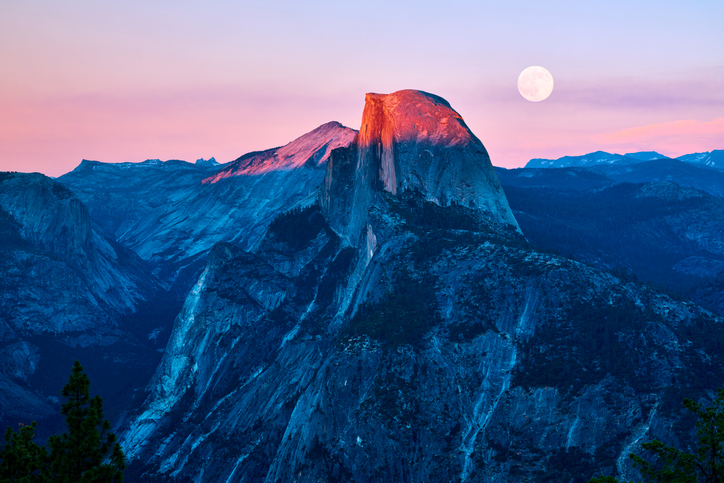 A GRANDER SURFACE AND A GRANDER STANDPOINT…COULD HARDLY HAVE BEEN FOUND IN ALL THE SIERRA.

By far, the most powerful symbol for Yosemite is Half Dome, the titanic half-egg of granite that presides over the entire valley from its eastern end, and whose sheer, 4700-foot-high face looks like it was sliced by a colossal knife. For years, even its humped back was thought to be unclimbable—until 1875, when one of the first settlers in the region, a retired sailor named George Anderson, decided to tackle it. He splashed tar over his trousers for adhesion and drove iron bolts into the slope every six feet to make a successful ascent. On learning of this conquest, naturalist John Muir “made haste to the Dome,” he wrote many years later in his book The Yosemite, to pull himself up by Anderson’s rope, “not only for the pleasure of climbing, but to see what I might learn.”

In 1919, the Sierra Club set cables on the route, and ever since, it has been the signature climb in the park, despite its difficulty for average visitors (in 2007, a Japanese tourist slipped and fell 300 feet to his death). In order to avoid the crowds, climb midweek or later in the day, when the path up Half Dome is all but deserted. Reaching the top will leave you exhausted but exultant. From the sheer lip, the sunshine pours like liquid gold into the valley below. It’s no wonder that Muir raved so: “A grander surface and a grander standpoint… could hardly have been found in all the Sierra,” he recalled, as clouds “of pure pearl luster” swirled miraculously around the valley below his feet.