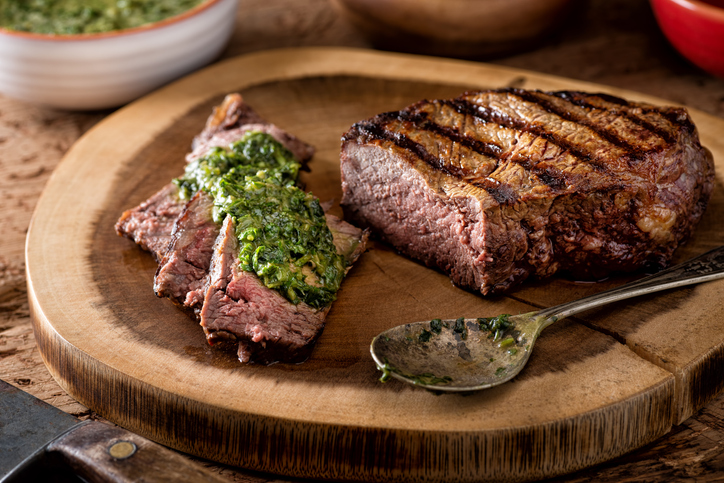 WHEN IT COMES TO ITS CULINARY RANGE, THE FOCUS IS SQUARELY ON BEEF, BEEF, AND MORE BEEF!

Buenos Aires may be the “Paris of South America,” but when it comes to its culinary range, the focus is squarely on beef, beef, and more beef! Every second street corner boasts a parrilla (steak house)—a temple to the carnivorous arts, where whole cows are roasted above hot coal pits, wall-charts show the prime meat cuts (including bife de lomo, sirloin, and bife de Costilla, T-bone), and tuxedoed waiters whisk the flesh from table to table like somber priests. But when you sit down to enjoy a succulent steak, it’s also worth considering beef’s pivotal role in Argentine history.

It all began in the Spanish colonial era, when a handful of imported cattle were let loose on the endless pampas and multiplied in record time on the lush grass. Huge estancias (ranches) sprang up, run by the hard-bitten southern gauchos (cowboys), brilliant horsemen who wore baggy pants and wielded sinister-looking knives. Beef became the Argentine staple at a time when only rich aristocrats could afford it back in Europe; even the poor could enjoy a steak for breakfast, lunch, and dinner.

Then, in the 1890s, breakthroughs in refrigeration meant that Argentina could ship its prize product overseas. Beef funded Argentina’s Golden Age: the city of Buenos Aires was rebuilt on the model of Paris (then the paragon of sophisticated urban beauty), and its citizens enjoyed a higher standard of living than the U.S. Millionaire Argentine playboys roamed European nightclubs, spending their money like Texas oil barons.

Today, the glory days are over, but you can still get a superb steak in almost any little restaurant in Buenos Aires, cooked bien hecho (well done), a punto (medium), or jugoso (rare). Be sure to ask for the chimichurri sauce, a spicy oregano-based mix that was a traditional gaucho favorite.

Travel to Argentina with Globus