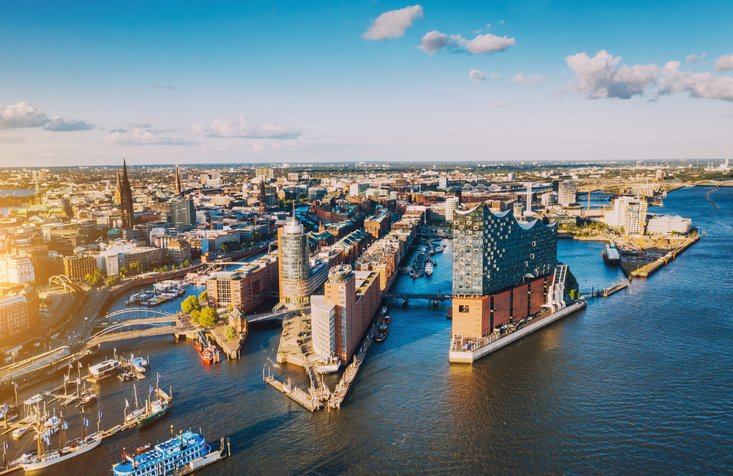 Americans with Central or Eastern European roots have a good chance of finding an ancestor or two in the emigration history of Hamburg. Between 1836 and 1914, 4 million people set sail for America from Hamburg’s Elbe River ports. Mostly from the lands of Russia, Germany, and Austria-Hungary, these were the true huddled masses—poor, unwashed, uneducated. Perfect targets for xenophobia.

In 1892, a cholera epidemic killed 10,000 people in Hamburg, causing an outcry against emigrants crowded into the filthy sleeping barracks on the America pier. Whether the epidemic started there or not, the foreigners were blamed and their numbers capped. Businesses that lived off the emigrant trade protested, and shipping magnate Albert Ballin hammered out a deal to build Hamburg’s version of Ellis Island.

On Veddel Island in the Elbe River, a quarantine complex was built in 1901 to shepherd emigrants hygienically from the Old World to the New. It had a train station, church, music pavilion, clean latrines and sleeping halls, and dining rooms with white table cloths. Pleasant surroundings, but a nightmare for the emigrants, who were interrogated, examined, tagged, and disinfected in gruff, military fashion.

Today, Hamburg preserves this link with America at the new BallinStadt, a museum and genealogy research center on Veddel Island. Like Ellis Island, BallinStadt recreates the emigrant experience using a restored sleeping barracks, artifacts ranging from antique toys to suitcases, and personal stories told through photographs and letters. Its emigrant database is linked to the U.S. census.