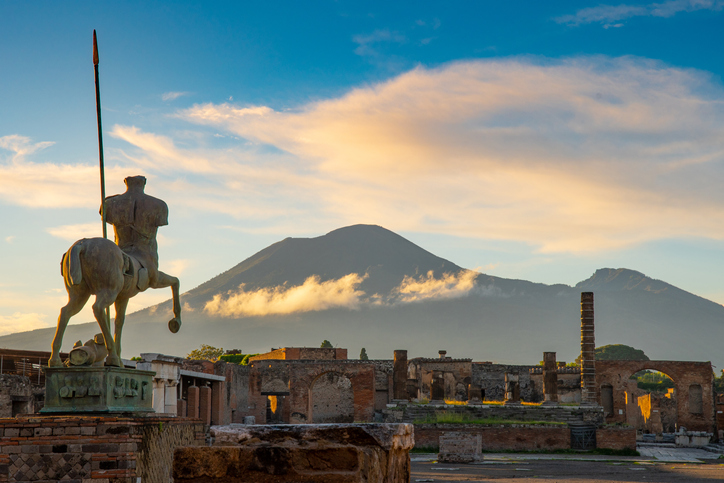 THE FIRST MCDONALD’S IN POMPEII

While wandering the superbly preserved streets of Pompeii, keep an eye out for the cauponae, early fast-food restaurants loved by the ancient Romans. Located on several corners and looking like open-air bars, these one-room establishments were where busy citizens could grab a quick meal and glass of wine on the run. They were identified by colorful signs over their doors (one place excavated in Pompeii had a Phoenix; another sported an elephant and pygmy). And like modern coffee bars in Italy today, customers stood at an L-shaped brick counter to order. There were jars full of hot and cold food, as well as amphorae of wine, which they could consume on the spot, take out to a few wooden seats provided on the street, or, in some cases, to a small back garden.

The atmosphere at these take-out joints was casual. Dining out was only for the plebs; wealthy Romans ate at home, their banquets prepared by private cooks. The cauponae were mom-and-pop operations. For example, we know that the stall on the Via dell’Abondanza was owned by a certain Vetutius Placidus and his wife, Ascula. The décor also was simple. There were usually a few paintings of gods on the wall—often of Mercury, god of commerce, or Bacchus, the cheery god of wine.

The menus were straightforward. Favorites included fried fish, pork sausages, partridge stew, fried eggs, and boiled green vegetables, which diners would saturate with a pungent fish sauce called garum, a condiment the Romans used as often as ketchup. Coarse bread was available, and garnishes included raw garlic and fresh figs. The wine was cheap and quite sweet by modern standards—Romans drank it mixed with water.

And not everyone rushed off after the quick meal. Locals would hang out for hours to gossip. Many fast food bars even doubled as gambling spots, where men crowded around tables playing dice. The upstairs was sometimes used as a brothel, which implies an ambiance raunchier than the average fast food emporium today. Even in Roman times, customers fretted about the quality of fast food. There were rumors of human flesh, even fingers, being found in cauponae meals.