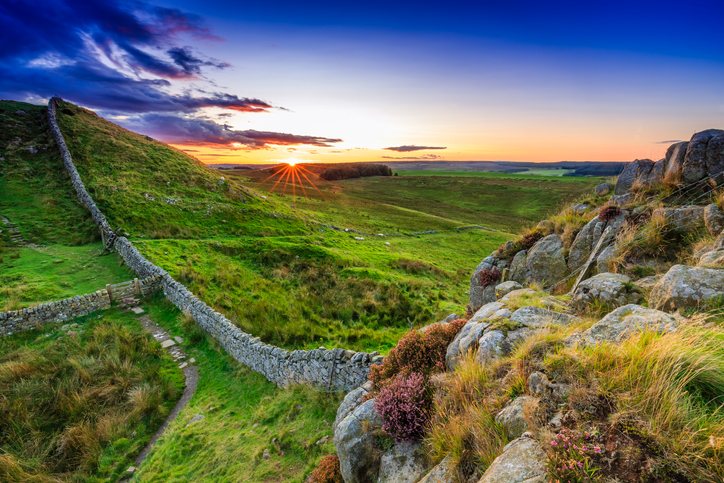 The English countryside is thick with historical ruins, but some of the most formidable were created by the world’s first superpower: ancient Rome. Conquered by Emperor Claudius in 69 AD, Britain became one of the remotest provinces of the sprawling Roman Empire—and among its most troublesome.

Decade after decade, Roman legions were dispatched to subdue the Pictish “barbarians” of the northern part of the islands (modern Scotland), but were defeated by its dismal weather, rugged terrain, and savage resistance. Worse, defiant Pictish raiders swept down from the Highlands to pillage peaceful Roman settlements, causing endless headaches for local governors. Finally, in 180 AD, visionary Emperor Hadrian had had enough of the troublesome frontier. He decided to build a 180-mile-long defensive wall through the narrowest neck of the island, with military towers set up every mile; forts would be manned by 1,000 men each to keep the enemy at bay.

These sodden, windswept outposts were among the least popular postings in the Empire for Roman soldiers, who longed for the warmer climates of the Mediterranean, but thanks to their impregnable stone barrier, they successfully kept the peace in Roman Britain for over 200 years. Only when the Roman Empire itself began to crumble, around 400 AD, and the once-disciplined Roman soldiers themselves became vicious bands of marauders, was Hadrian’s Wall abandoned. Even so, the edifice remained, more or less, for another thousand years—until the Normans in the Middle Ages realized that the beautifully-cut Roman stone would make excellent material for their castles, so the masonry has been largely pillaged.

Today, anyone driving from England to Scotland can turn off from the main highways and visit the eerily abandoned remains of Hadrian’s once-splendid Wall—now peaceful and picturesque, wandered by herds of sheep instead of wild-eyed barbarians.