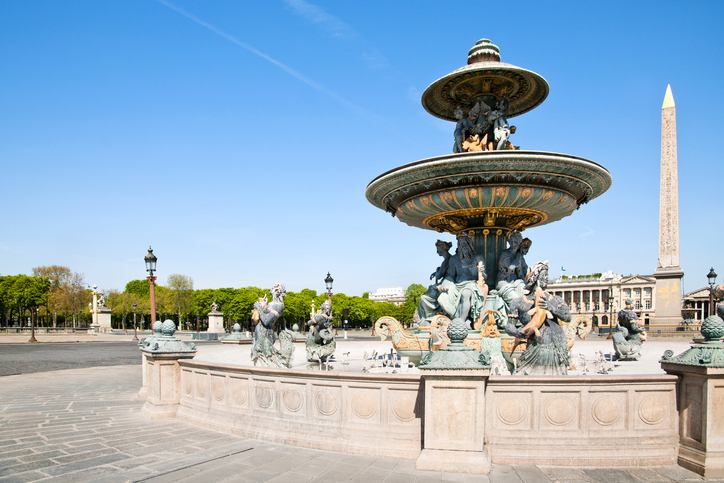 One of the prettiest spots in Paris today was also once the bloodiest. The elegant Place de la Concorde now has an uplifting view across parkland to the broad Champs Elysée and the gracefully curving River Seine. But during the French Revolution, this was where the dreaded guillotine was erected—on a spot halfway between the Egyptian obelisk and the Tuilleries.

Every day, wagons filled with unlucky victims would rattle along the Rue St. Honoré from the Conciergerie Prison to this notorious plaza, which had been renamed the Place de la Revolution. Bleachers were erected to allow the Parisian mob a better view of the executions, with a carnival atmosphere prevailing and food vendors working the crowd. But while lowlifes and tourists filled the audience, many more sensitive Parisians simply turned their backs on the bloodshed. A plaster statue of Liberty was apparently close to the scaffold, since there is an account of an early victim directing her famous last words to the statue, “Oh, Liberty, what crimes are committed in your name!”

On January 21, 1793, it was here that King Louis XIII was beheaded. According to eyewitnesses, crowd members rushed to the guillotine to dip their fingers and handkerchiefs in the king’s blood. His wife, Marie Antoinette, fell under the blade soon after. By then, the terror, led by lawyer Maximilan Robespierre, was expanding its scope until nobody was safe. One former revolutionary hero, the burly orator Danton, would find himself facing the guillotine. As he mounted the scaffold, he said wryly to the executioner, “Make sure you show my head to the people; it’s worth seeing.” Soon after, Parisians rose up against Robespierre and dragged him to his own death, after which the guillotine was covered up and eventually destroyed.

Between 1792 and 1795, the guillotine claimed 1,119 victims. Their names and professions are commemorated on a plaque in the Conciergerie prison. The victims were not just aristocrats, but bakers, shoe-makers, prostitutes, and street sweepers. To blot out the evil memories, the square was renamed the Place de la Concorde (Peace Place) and today, many Parisians do not even realize it was the site of the guillotine.