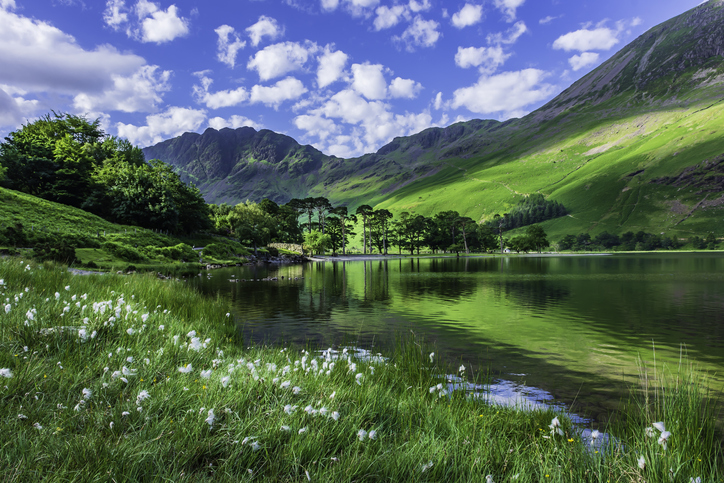 None of England’s rural settings are so closely associated with a single writer as the Lake District is with poet William Wordsworth, an immensely popular figure who draws crowds of devotees every summer. Wordsworth was born in the region in 1770 and throughout his long life (he died at the age of 80) he celebrated its spectacular mountains, idyllic forests, and shimmering waters. His youthful spirit still feels present in his quaint 18th-century abode, Dove Cottage, which sits amid classic English gardens by the village of Grasmere.

Wordsworth moved here in 1799 at the age of 29, with his beloved younger sister, Dorothy, and wrote some of the most influential poetry in the English language. The beauty of the Lake District was a constant inspiration. As a child, he went on long walks through this picturesque countryside to escape his distant father and cruel grandparents; later in life, the habit of vigorous hiking prevailed. His writings in praise of the healing power of nature would become cornerstones of the Romantic movement and change the way we view the world.

Today, the cottage, with its cozy little rooms, blackened fireplaces, and perfect views of his rose-filled garden still has a lived-in feel; the adjacent museum contains poignant mementoes of Wordsworth’s life, including the original manuscript of Daffodils, which was written here (“I wandered lonely as a cloud…”). Literary pilgrims continue to the poet’s grave at St. Oswald’s churchyard nearby, but perhaps the most genuine homage is to take an afternoon stroll in the countryside Wordsworth loved so much. Start at the nearby village of Elterwater and follow the mile-long path along a shady brook to lakes filled with swans and surrounded by daffodils. Return for a pint of ale at the 18th-century Britannia Inn, and you’ll start to feel like a Romantic poet yourself.