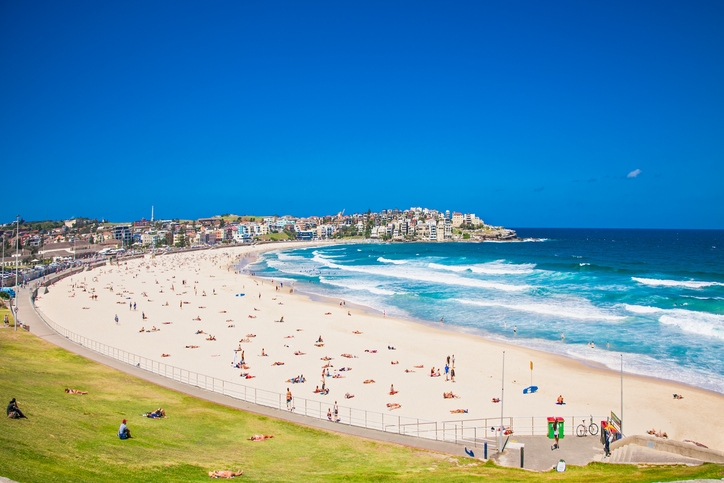 As Sydney Harbour stretches its turquoise tentacles into every inner suburb of Sydney, the 70 beaches that lace the city’s edges have created a hedonistic surf culture on par with Rio and Waikiki. The most beloved of the urban beaches is Bondi. Here, between sandstone headlands at the eastern fringe of the city, the long glassy rollers of the Pacific Ocean thunder onto a half-mile of golden powdery sand.

In the 1920s, Bondi was a modest version of Coney Island, where city dwellers in need of fresh air would travel by rattling tram to cool off with an ice cream or cheap fish-and-chips by the sea. In the 1950s, the surf craze arrived from Hawaii, luring thousands with their boards into the crashing surf. And since the 1990s, Bondi has gentrified, attracting millionaires and movie stars. Today, the beachfront promenade is Down Under’s answer to Copacabana—home to a taut, bikini-clad café society, with seafood restaurants and Art Deco pubs with million-dollar views.

Even so, Bondi has retained its democratic roots. Perhaps its most symbolic site is the Icebergs Club, perched on the southern headland like a pagan temple. It was founded in 1929 as a winter swimming venue for older gents, but it has developed into the total Aussie entertainment venue— the world’s only health club that also boasts two restaurants and a liquor license. You can join the buffed Bondi residents for a few laps in the saltwater Olympic-size pool, then saunter up to the Sundeck Café for seafood and wine overlooking the famous surf. If you’re still around at dusk, the top-floor Icebergs Bar, a study in chic jet-age décor, is the coolest hangout in Sydney to watch the sunset.