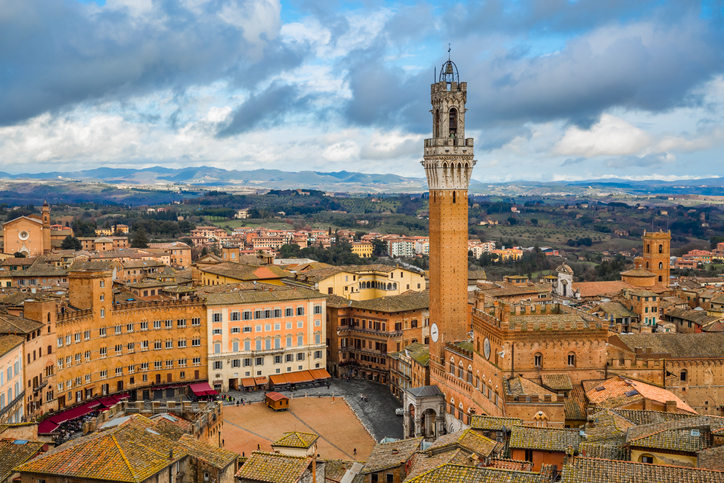 A SERIES OF HORSE RACES HELD IN THE PIAZZA

Siena’s Piazza del Campo is a town square shaped like an oval. Sloping gently down to the Palazzo Pubblico and the Torre del Mangia, it is divided into sections representing the city’s nine rulers in the 1400s, known as the Council of Nine. But the piazza’s striking medieval ambiance is not only due to the surrounding architecture, but for a race. For most of June, July, and August, the entire city is devoted to Il Palio, a series of horse races held in the piazza, whose ancient passions make the Kentucky Derby seem like a fly-by-night event.

The festival’s contours have not changed since the 1100s, when members of the city’s 17 contrade (town districts) began to compete with one another in track events. The two central races are held every July 2 and August 16, but the pageantry and excitement dominate Siena for the entire summer.

The Piazza del Campo is lined with bleachers and paved with a clay track; brilliantly colored banners and flags of the town districts are hung from windows; officials and jockeys stroll about in colorful medieval outfits; horses adorned in silk are paraded through the streets and even taken into churches to be blessed, guarded by members of their contrada.

If you happen to be in the city for one of the two main races (or one of the trials held on the two evenings before each), be prepared for crowds as rowdy as an Italian soccer final. Thousands pack into the piazza to watch the races from behind barriers. The races may last only about 90 seconds as the horses charge three times around the square, but they are filled with drama. There is chanting and singing, rising above the competing contrade groups, roars of excitement, spectacular and often grisly accidents, and, finally, wild celebrations by the victors, which last late into the night. It must have been very much like this back in the 12th century—the festival offers the most vivid glimpses of one of the most popular historic traditions in all of Italy.