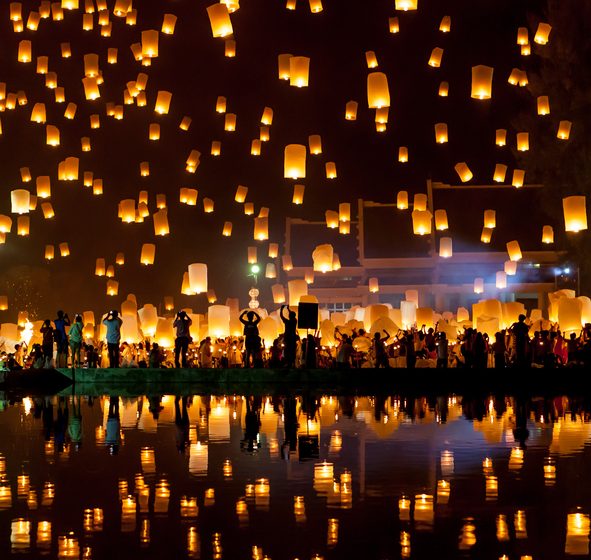 THIS CELEBRATION, WITH ITS ROMANTIC LANTERN LIGHTING, ACTS AS A HOLIDAY FOR YOUNG LOVERS.

Originally a religious ritual born nearly 2,000 years ago, the Lantern Festival (Yuanxiao Jie) began when Buddhist leaders lit lanterns to show respect to their spiritual founder on the 15th day of the first lunar month, on the last day of the Chinese New Year. Shortly after this religious observance developed, the ceremony spread to the Imperial Palace by edict of Emperor Mingdi—and Chinese society followed by turning it into a national celebration.

In its beginning, the Lantern Festival included the display of lanterns of all shapes and sizes. To enhance the festivity over the years, the festival added fireworks and games for young and old alike. Today, handmade lanterns often feature riddles posted on the lamps for visitors to try to guess. For a correct answer, the lantern-maker may present a small gift to the individual.

Another important component of the Lantern Festival is Yuanxiao, the traditional treat of the celebration. A glutinous rice ball (dumpling), Yuanxiao is made with sticky rice flour filled with sweet stuffing—and is so important it’s the namesake for the whole festival! This celebration, with its romantic lantern lighting, also acts as a holiday for young lovers, similar to America’s Valentine’s Day.