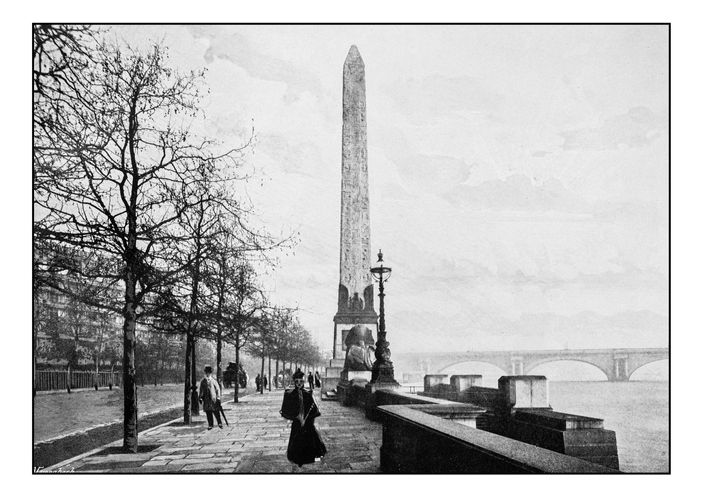 London is littered with artworks pillaged during its heyday as the seat of the British Empire. But certainly no relic has had a more colorful journey than Cleopatra’s Needle, a 3500-year-old ancient Egyptian obelisk that looms in front of the Embankment Gardens by the Thames. The red marble obelisk was carved in the quarries next to the River Nile in 1380 BC, to honor Pharaoh Thutmose III, and moved by Queen Cleopatra to Alexandria around 40 BC. Rediscovered by archaeologists in the early 1800s, it remained in Egypt until 1877, when the British Government decided that it wanted a suitable memorial to commemorate Lord Nelson’s victory over Napoleon in Egypt. At the time, Egypt was a British possession, and the authorities easily parted with their national treasures.

But the logistics of transporting a 68-feet-high, 180-ton monument to London were complex. A doctor named Sir William Wilson organized a public fund of £10,000 to build a special cigar-shaped pontoon, called The Cleopatra, which had to be towed by steamship through the Straits of Gibraltar. The plan was fraught with mishaps. The boats hit a storm off the coast of France and the Cleopatra had to be cut loose. Miraculously, the Cleopatra did not sink. Instead, after bobbing about for four days, the mysterious iron cigar-boat was found by a Spanish trawler and towed to port. After endless legal wrangling and more fund-raising, the sea-battered relic was safely brought to London, where the obelisk was erected in 1878 to great fanfare. Today, it remains less a memorial to Nelson’s hard-won victory than to the obsessive perseverance of the Victorian Age.

Travel to London with Globus