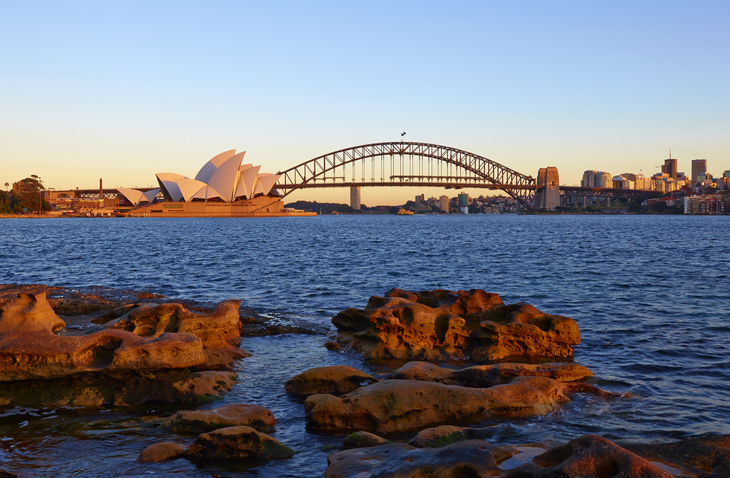 Sydney Harbour is Australia’s most renowned natural feature—a glorious, deep-water inlet where yachts flit past the vast pearly shells of the Opera House and under the soaring steel arc of the Harbour Bridge. (Completed in 1932, it is referred to locally as “the Coat Hanger”).

Today, over 200 years since it was settled by the British, the harbour remains surprisingly in touch with nature. Much of the shorefront, Australia’s most valuable real estate, is still protected as national park land. Walking tracks curve through eucalyptus-fringed wilderness filled with boisterous native birdlife and up along high sandstone cliffs riddled ancient Aboriginal rock carvings. But few visitors realize that Sydney’s most iconic landmark, the Opera House—as recognized as the Eiffel Tower or Empire State Building—was almost never completed.

The Opera House’s radical design by Danish architect Jørn Utzon was chosen from an international competition in 1957, even though engineers at the time had no idea how to build it. Work began in 1961, but with embarrassing missteps. Within five years, the prototype sails had to be taken down and totally recommenced. Budget blowouts dogged the project until the perfectionist Utzon resigned over cost-cutting measures. Construction continued anyway, with the interior design modified. The embittered Utzon refused to visit Sydney again, and has still never seen the finished building hailed regularly as one of the seven architectural wonders of the modern world (or, as Aussie art critic Robert Hughes described it, “the biggest environmental site-specific sculpture south of the equator”). A recent reconciliation occurred when an interior annex was completed to Utzon’s original design, but the architect was too old to visit; he sent his son to the Opera House instead.