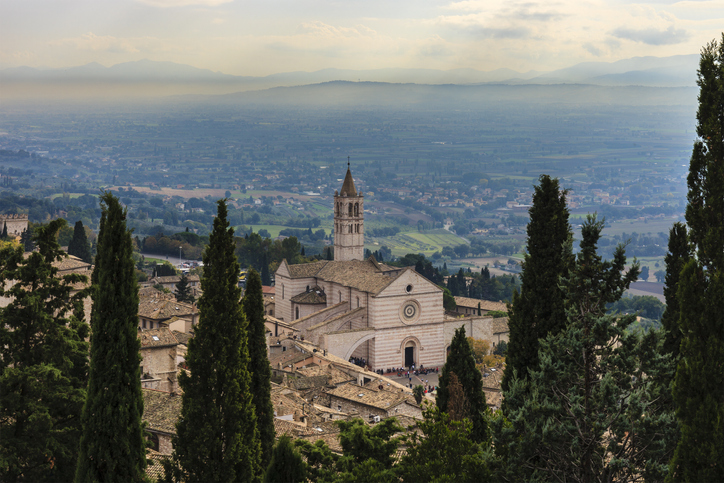 Saint Francis may be Assisi’s most internationally famous son, the charismatic preacher who has been the subject of numerous bio-pics. But his female counterpart, Saint Clare, evokes almost as much devotion among Italians. Her life story reads like a medieval inversion of The Sound of Music: a beautiful young woman born into a wealthy family who was betrothed at an early age to a dashing local noble and seemed destined for a conventional life of luxury and pleasure. But her future was transformed in 1210 when she saw the handsome young Francis, espousing the sacred virtues of poverty, in the streets of Assisi. Clare immediately cut off her long golden hair, took a vow of celibacy, gave away all her fine clothes, and began to dress in a simple cassock. She soon founded her own religious order for women, the Poor Sisters of Saint Clare, which demonstrated a devotion to good works that matches the all-male Franciscan order of monks. In fact, she is often known to Catholics as alter Franciscus (another Francis).

Among Clare’s lesser-known honors is that she is the patron saint of television. She was actually given this designation by Pope Pius XII in 1958, on the basis of a miracle that occurred at the end of her life. One Christmas Eve, Clare had been too ill to attend Mass, but the entire religious service was transmitted to her miraculously in a vision. The Pope also designated Clare the patron saint of all telecommunications, including the telephone, an invention dear to the hearts of cell phone-obsessed Italians.

Today, Claire’s body can actually be visited in the lovely crypt of the Basilica di Santa Chiara. It’s a romantic setting. She is clothed in an immaculate habit, holding a bouquet of fresh flowers and seems to be peacefully dreaming beneath a ceiling that is painted as a starry sky. No cell phones or televisions are on display.