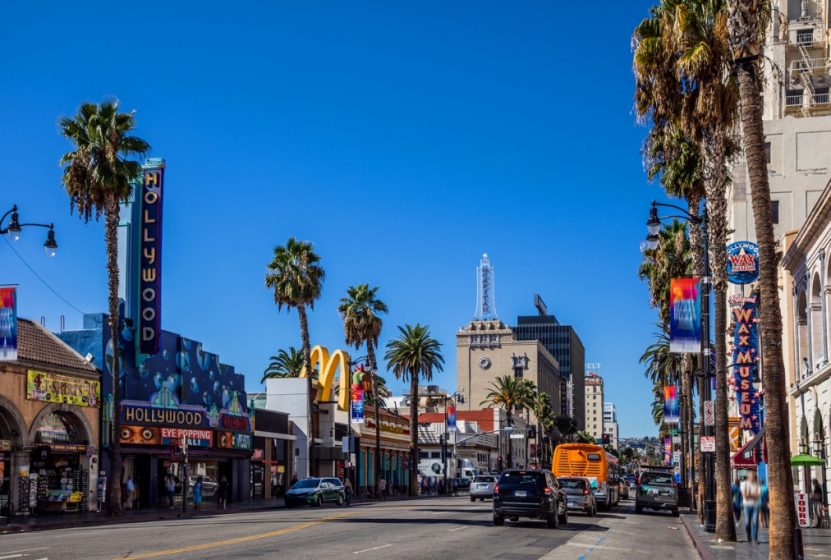 THE THEATER’S SIGNATURE ATTRACTION WAS INVENTED BY “PURE ACCIDENT.”

No matter how many times you see celebrity-studded movie premieres at Grauman’s Chinese on Entertainment Tonight, it’s still a pleasure to take in those coral-red pagoda walls and copper turrets rising above Hollywood Boulevard. Opened in 1927, the world’s most famous cinema was the brainchild of silent-era impresario Sid Grauman, the creator of the enormously successful Egyptian Theater nearby, who next dreamed of an Oriental fantasy that would dazzle the generations.

Working with megastar partners Mary Pickford and Douglas Fairbanks, Jr., Grauman spent $2 million importing luxurious artifacts from China, including bronze temple bells, stone Heaven Dogs, and a 30-foot-high stone dragon. The opening ceremony was the most sought-after social event in Hollywood history, with thousands of sightseers packing the boulevard as stars arrived to see Cecil B. DeMille’s King of Kings. A riot even broke out and the LA police had to be brought in.

The theater’s signature attraction—the footprints, handprints, and signatures of Hollywood stars, from Cary Grant to Rita Hayworth—was invented by “pure accident,” Grauman once confessed. He was visiting the construction site when he accidentally stepped in the concrete. His partner, silent film goddess Pickford, happened to be with him at the time, and he suggested she do the same, quickly followed by Fairbanks. After the success of opening night, every star in Hollywood wanted to make his or her mark—and not just with palm or feet. In the decades since, John Wayne left his fist mark, Groucho Marx impressed his cigar, Gene Autrey’s singing horse left its hoofprints, Betty Grable—an imprint of her shapely legs, and Star Wars robot R2D2 left its tread pattern. Marilyn Monroe even left a rhinestone stud to dot the “i” in her name, but it was (unsurprisingly) pilfered by a souvenir-hunter.